You are here: Home / National News / Cannibal Cop May Be Soon Walking Free 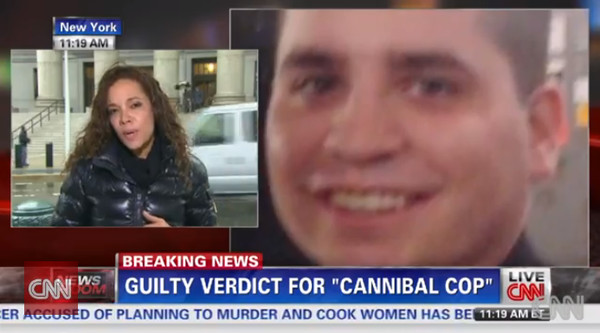 In case you are not familiar with the matters, let’s resume the facts, as this is a very interesting case of American legislation with further implications on the use of Internet as reliable ground for criminal charges and convictions.

was found guilty of elaborately plotting with others he met on fetish websites to abduct, torture and eat women, including his own wife, who discovered the conspiracy on his computer and ran out of the house with their daughter wearing just the clothes on her back. His lawyers, who wrapped up their defense in a single day and did not allow Valle to testify in his defense, had argued that all of this was just a sick fantasy that Valle never intended to act upon.

The jury deliberated for only two and a half days before reaching the verdict. News back in the day reported that Valle was seen with teary – eyes and his hands shaking in awaiting (and receiving) the verdict. Life in prison was a mild punishment, some voices said, but everybody was happy with “the monster” being captured and convicted.

Now, however, the tables are turning in the favor of the Cannibal Cop. According to the media, the judge motivated his acquittal decision based on the fact that not everything people say on the Internet becomes true. Sometimes we just let our fantasies talking, but we don’t let them turn to life:

The evidentiary record is such that it is more likely than not the case that all of Valle’s Internet communications about kidnapping are fantasy role-play.

However, back in the day, the jury wasn’t so convinced Valle was just role – playing when he was talking with complete strangers he met online about his plans of kidnapping, torturing and eating women, starting with his spouse.

The verdict was also based on some steps Valle took to accomplish his fantasies: showcasing the evidence, the prosecution insisted on the fact that Valle played out the preparatory steps of fulfilling his fantasy: he found targets through the restricted law enforcement database, he looked up on the Internet on methods of putting somebody down with the help of chloroform and he looked for shopping sources of torture tools.

One excruciating evidence against him and probably the most gory of them all is that he searched Google for “human meat recipes”. In the eyes of the FBI, this was way too much. This evidence was enough for the 2013 jury to send Valle in jail for the rest of his breathing days.

But the same evidence doesn’t seem to be enough for judge Paul Gardephe. The reason for which the judge considers Valle poses no threat to society and doesn’t deserve to rot where the sun don’t shine is that nothing actually happened in the time – frame Valle was plotting to become a professional kidnapper and women – cooker. No women were harmed, no tools were bought, no kidnappings performed, no nothing. Just the use of police database and extended conversations with creepy people about roasting alive women on low heats.

The judge planned a hearing on Tuesday to re-evaluate the status of the case. While the initial charges included unauthorized access to restricted police database, this particular crime is in fact the only one Valle has to pay for. He already served the year punishment for this felony, so he might walk free sooner than expected.