You are here: Home / Uncategorized / Bodies of MH17 Victims Recovered 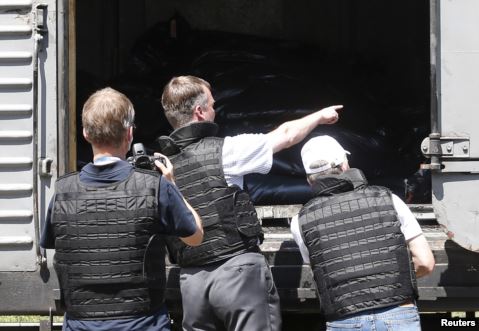 According to the latest information received from the Ukrainian government, 219 bodies have been recovered and identified from the site where flight MH17 crashed on Thursday with 298 people on board. Moreover, it seems that body parts have also been recovered from 28 additional bodies, and as such, only 51 people currently remain unaccounted for.

A European delegation has also received permission to access the crash site in eastern Ukraine. Official representatives of the Organization for Security and Cooperation in Europe have inspected the site as well as a refrigerator wagon in which bodies of the passengers had been contained.

Questions still remain as to whether the Ukrainian officials or the pro-Russian separatists have control over the bodies of the 298 victims of the Malaysian aircraft. Some sources have confirmed that rebels have indeed taken control of several bodies. Other reports state that the majority of bodies are found in refrigerated railway wagons in Torez, near to the crash site. Negotiations are being held to allow the bodies to be transported back into territory that the Ukrainian government controls.

Michael Bociurkiw (Organization for Security and Cooperation in Europe representative) spoke via mobile to reporters in Kiev and described the entire situation as gruesome. He and his colleagues were staring at broken aircraft parts, fuselage, engine pieces and what seemed to be the middle part of the plane. He also described a lot of debris and the victims’ bodies that were banged up and ripped apart, among which emergency workers were running around. He and his team could actually inspect several of the refrigerated railway wagons in which bodies are being kept but sadly couldn’t make a count. Bociurkiw explained that without protective gear, entering the wagons would have been impossible due to the overwhelming stench.

OSCE officials have described themselves as independent observers who are currently on a human rights mission in eastern Ukraine and while they are no disaster investigators, they are doing their best to investigate this disaster as thoroughly as possible.

According to rebel leader Alexander Borodai, the bodies of the victims will have to remain within the refrigerated train wagons until an international aviation delegation will arrive in the area. Borodai insisted that the bodies would not be moved until they will have been inspected by experts. Rebels also hold the flight data recorders from MH17 and declared that they will be handed over to the corresponding officials (of the International Civil Aviation Organization) in due time.