You are here: Home / National News / Another Plane Disappears from the Radar Carrying 116 People

This morning an Air Algerie flight to Algiers from Burkina Faso has disappeared from radar. The official Algerian news agency said that the flight was carrying 116 people and the disappearance happened over Sahara.

France 24 TV reported that French Transport Minister Frédéric Cuvillier stated that it is very likely that many of the passengers on that plane were French.

The place disappeared from the radar 50 minutes after takeoff, at 0155 GMT. The air navigation services lost track of the plane hours before the news was broke to the public. 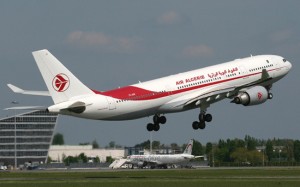 Air Algerie said this about the efforts to find the plane:

In keeping with procedures, Air Algerie has launched its emergency plan.

The aircraft that disappeared was an MD-83 and the flight number was 5017. The owner of the missing plane is Swiftair, but the plane is operated by Air Algerie. There were 100 passengers on boards and 6 members of the crew.

An unidentified source with the airlines was quoted by the AFP, the French News Agency, saying:

not far from the Algerian frontier when the crew was asked to make a detour because of poor visibility and to prevent the risk of collision with another aircraft on the Algiers-Bamako route.

The plane took of from Ouagadougou, the capital of Burkina Faso and it was headed to Algiers. The flight path is not yet clear, but it was reported that the flight AH 5017 flies the Ouagadougou-Algiers route four times a week. The plane was supposed to reach Algiers at 0510 local time.

The plane would have passed over Mali, where there are still military and political tensions. A senior French official claimed that it was very unlikely that Mali fighters had the weapons necessary to shoot down a plane.

The French official refused to give his name to Associated Press, because he was not authorized to speak of this situation, but also said that the fighters there only had shoulder-fired weapons that could not affect an aircraft flying at that altitude.

Whether that is true or not, we hope this is not the case and that all passengers are found safe and sound as soon as possible. We will keep you posted with any news about the Air Algerie plane that disappeared from the radar today over the Sahara desert, carrying 116 people. What are your thoughts on this? Drop us a line in the comment section below.