One of the biggest baby booms in North American history didn’t occur anytime recently. Instead, it occurred within Native American populations between 500 and 1300 AD. Now, scientists have taken a closer look at this massive baby boom as they learn a bit more about what kind of events led up to the boom and then caused population numbers to rapidly decline.

The researchers looked at a century’s worth of data on thousands of human remains found at hundreds of sites across the Four Corners region of the Southwest. After studying these remains and the sites where they were located, the scientists were able to create a detailed chronology of the area’s transition from a hunter-gatherer society to a farming society; stone tools revealed a transition from cutting meat to pounding grain.

Funded by the National Science Foundation, the study looks at a century’s worth of data on thousands of human remains found at hundreds of sites across the Four Corners region of the Southwest. While many of the remains have been repatriated, the data let Kohler assemble a detailed chronology of the region’s Neolithic Demographic Transition in which stone tools reflect an agricultural transition from cutting meat to pounding grain. 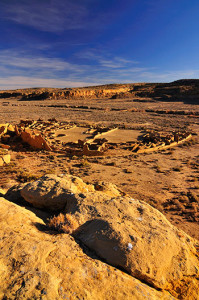 “It’s the first step towards all the trappings of civilization that we currently see,” said Kohler. Jean-Pierre Bocquet-Appel, a French expert on prehistoric populations and guest editor of the PNAS article, has called the transition “one of the fundamental processes of human history.”

Maize which we know as corn, was grown in the region as early as 2000 B.C. At first, populations were slow to respond, probably because of low productivity, said Kohler. But by 400 B.C., he said, the crop provided 80 percent of the region’s calories.

Crude birth rates, the number of newborns per 1,000 people per year were by then on the rise, mounting steadily until about 500 A.D.

The growth varied across the region. People in the Sonoran Desert and Tonto Basin, in what is today Arizona, were more culturally advanced with irrigation, ball courts and eventually elevated platform mounds and compounds housing elite families. Yet birth rates were higher among people to the north and east, in the San Juan basin and northern San Juan regions of northwest New Mexico and southwest Colorado.

Kohler said that the Sonoran and Tonto people eventually would have had difficulty finding new farming opportunities for many children since corn farming required irrigation. Water from canals also may have carried harmful protozoa, bacteria and viruses.

But groups to the Northeast would have been able to expand maize production into new areas as their populations grew.

He points to the warning of Thomas Malthus, who warned back in the 18th century that humans would eventually become too numerous for Earth’s limited resources to support.

“Despite huge advances in farming and food distribution systems, modern-day humans are still vulnerable to catastrophic changes, and shouldn’t take for granted the resources and climate we depend upon for survival,” he says. Kohler, “We can learn lessons from these people.”

Perhaps the population had grown too large to feed itself as the climate deteriorated. Then as people began to leave, that may have made it harder to maintain the social unity needed for defense and new infrastructure, says Kohler.

Whatever the reason, he says, the ancient Puebloans show that population growth has clear consequences.