You are here: Home / Health / A New Test Predicts Which Teens Will Have an Alcohol Problem 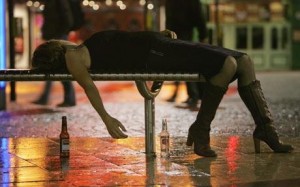 This may sound like it’s taken out of a sci-fi movie, but Medical Daily just reported that there is a new test available that will tell the parents which of their children will grow up to abuse alcohol in their teen years, specifically, which of them will binge drink.

Binge drinking is an alcohol related issue that involves the consumption of large quantities of alcohol during short periods of time, for example on the weekends. It can lead to other more serious conditions, such as alcoholism and even alcohol poisoning.

This new study published in Nature, researchers from the University of Vermont analyzed the genes and brains of thousands of teenagers and they’ve discovered the common traits binge drinkers share. These traits, or indicators, can help predict which persons will end up binge drinking in their teen years with 70% accuracy, which is quite mind-blowing. So what are those critical signs and indicators?

This massive study involved 2,400 European teenagers from when they were 14 years of age until they were 19 years old. At the beginning of the study they took a 10-hour assessment exam in order to assess and evaluate the state and structure of their brains. They were also administered IQ tests, blood tests, gene analysis tests and personality assessments. They were pretty much given every test in the book.

In short, the researchers found that the ones who engaged in binge drinking by the age of 16 had reduced grey matter inside their brains and also a greater activity in their frontal gyrus, which usually indicated an increased response to getting gratification. The results of the study showed variables that were able to predict alcohol abuse long before the end of the study at the age of 19.

Co-author of the study, Dr. Gunter Schumann had this to say about the study and the test:

We aimed to develop a ‘gold standard’ model for predicting teenage behavior that can be used as a benchmark for the development of simpler, widely applicable prediction models. This work will inform the development of specific early interventions in carriers of the risk profile to reduce the incidence of adolescent substance abuse.

Schumann is head of Social, Genetic and Developmental Psychiatry Center at King’s College in London.

As a parent, would you submit your child to this type of test? Would you want to know if your child had a very high chance of becoming a binge drinker? Tell us your thoughts in the comment section below, we would love to hear what you have to say on this issue.