You are here: Home / Tech & Science / The 99 Days of Freedom Experiment 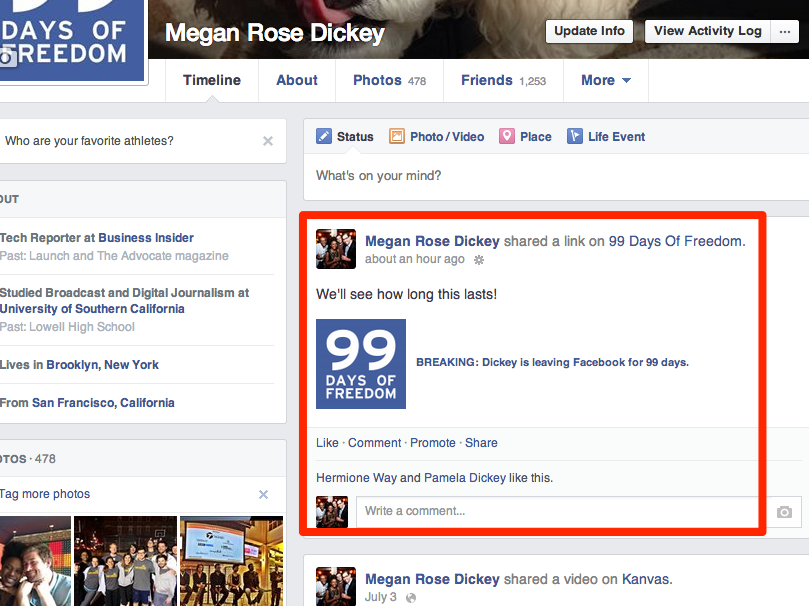 A creative agency from Leiden, The Netherlands, came up with a surprising challenge: “99 Days of Freedom”. In other words this campaign challenges Facebook users to quit their habit for 99 days. This is a response to Facebook’s 2012 experiment on its own members that leaked out a couple of weeks ago.

Apparently Facebook attempted to manipulate its members by allegedly showing optimistic or depressive messages in their news feed in order to investigate empathy among people. The results proved the fact that people who were presented depressing news feed posts tended to become depessed themselves. On the other hand, optimistic posts increased optimism among viewers.

“In response to Facebook’s controversial mood experiment involving some 700,000 unwitting users, we present you 99 Days of Freedom; an online study on how life without Facebook impacts user happiness. Joining is very simple: follow our three-step instruction to join the experiment for as long as you like. We can’t wait to hear how you spend your time off,” states a note on the group’s website.

The people of Just are of the opinion that people will save about 28 hours or 1683 minutes of their time if they decide to adhere to this campaign.

If one is brave enough to give it a try, a few steps are to be followed. First of all a specific avatar needs to be downloaded and installed as a Facebook profile picture substitute. In this way all your friends will be informed regarding your action of protest towards FB.

The next thing to do is to create a sort of “personal countdown,” eventually followed by a “happiness survey,” according to your wishes. This should be about your life without Facebook, probably their attempting to prove the fact that you will still have a life, despite everyone’s initial fear. Probably a new life accompanied by the other “brothers of protest.”

“Our prediction is that the experiment will yield a lot of positive personal experiences and, 99 days from now, we’ll know whether that theory has legs,” the Just group wrote in a press release.

Apparently 1000 people have claimed to be brave enough so far and try the 99 Days of Freedom. Nevertheless this number is likely to increase. This experiment more like a group therapy than anything else, but it’s definitely a useful attempt. It’s like a safety net for a hefty part of Facebook’s members who secretly dream of quitting.