You are here: Home / Health / WHO Warns against Proportion of Ebola Outbreak in West Africa 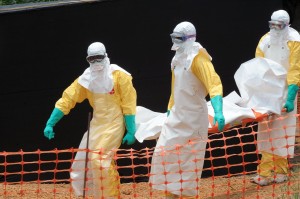 The world watches in horror, as the Ebola virus outbreak in West Africa takes on ever bigger proportions. A statement made by World Health Organization representatives and relayed by CNN and other major media outlets on Thursday says “drastic action is needed” to keep the epidemic under control. The global organization in question has already sent over several expert teams, whose mission is to help the local population deal with the outbreak. Next week, the World Health Organization plans on holding a meeting, in order to address solutions for limiting the spread of the outbreak.

Sources in the area, who are currently involved in the aid and relief efforts, say the epidemic has reached proportions never before seen. The operative director of Doctors without Borders, Dr. Bart Janssens, has stated that the epidemic is out of control. In numbers and figures, as conveyed in a World Health Organization released Thursday, this means at least 600 cases and 390 fatalities have already been recorded in the West African territories of Guinea, Sierra Leone, and Liberia. The count started in March, when the epidemic was first officially recorded. To make matters worse, none of the three previously mentioned countries benefits from a medical infrastructure that could sustained a more efficient relief effort. Aside from the difficulties in providing care, the local communities are also mistrustful of international aid workers. As per statements made by WHO members dispatched to Sierra Leone and Guinea, locals there have thrown stones at medical workers sent to investigate the situation.

Dr. Sanjay Gupta, the Chief Medical Correspondent of CNN, traveled to the Guinean capital of Conakry this April, to report on the situation and relay news of containment and treatment efforts. According to Gupta’s reports at the time, “It took only moments to feel the impact of what was happening here. There is a lot we know about Ebola, and it scares us almost as much as what we don’t know.” The difference between this particular outbreak and previous similar epidemics is its scale and distribution. Typically, Ebola outbreaks are contained to remote locations, which make the footprint of the disease easier to keep under observation and manage. This one, though, has been spotted in more than 60 different places across Guinea, Sierra Leone, and Liberia. Officials explain that this is possibly due to the fact that the virus first appeared close to a jungle, as well as near the city of Conakry. The capital of Guinea is inhabited by over 2 million people and also serves as the location of an international airport.