A team of researchers at the Korea Advanced Institute of Science and Technology (KAIST) have created a new sprinting robot inspired by a  completely different creature velociraptor- the dinosaur from the Cretaceous Period. 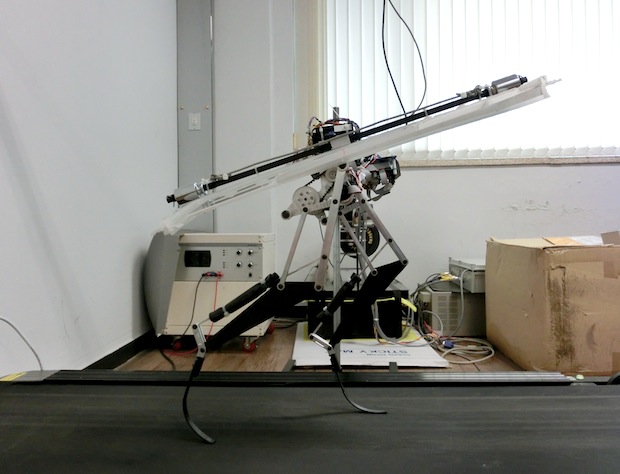 The robot uses two carbon composite legs and even has Achilles tendons, that serves the purpose of springs that aids in recapturing energy from its gait. Raptor runs a computer program known as a running pattern generator, which controls gait and speed.

Raptor uses just one motor per leg, which consists of a nine-bar linkage.

The robot, called the Raptor (means “fast”), runs on two nimble legs, and is capable of running at a remarkable speed of 46 kilometers per hour (kph), or 28 miles per hour (mph), on a treadmill. 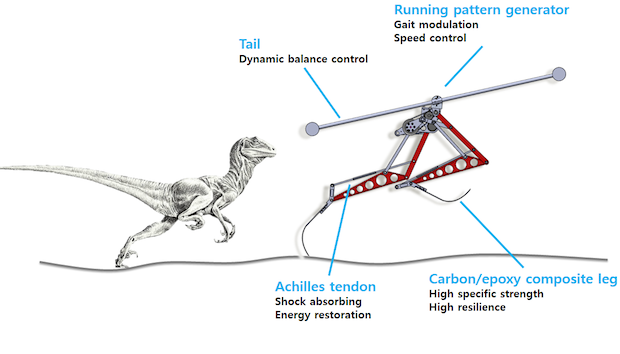 Raptor can run faster than Usain Bolt, the Olympic sprinter and the fastest known human, who has a recorded top speed of 44.7kph (27.44 mph). The robot is almost as fast as Boston Dynamics’ Cheetah, which is modelled on the fastest mammal alive,  which can run at 47kph (29.3 mph) as recorded in September 2012.

While on the treadmill the Cheetah runs on four legs and is powered by hydraulic actuators and is bulky and solid, Raptor weighs 3 kilograms, and its legs are made of lightweight composite material.

It also has a tail, of sorts, to provide balance.

Jongwon Park, a PhD student at KAIST’s Mechatronics, Systems, and Control Laboratory, said that the tail may not look like that of a real velociraptor, but it operates just like one, moving quickly to keep the robot steady while it steps over obstacles.

According to a recent video the robot constantly increased its speed until it reaches 46kph. The robot managed to dodge the hindrance kept in his path by the researchers because of its tail.

Both the robots were attached to keep them from falling.

Eventually, though, the researchers hope to cut the cable so it can walk unassisted, in similar style to the Cheetah bot.

Raptor is not the first robot to sport legs with prosthetic blades, either. Several years ago another biped running robot, Athlete, was built, also utilised carbon-fiber running blades.

The Cheetah was a joint venture of Defense Advanced Research Projects Agency (DARPA) and Boston Dynamics to travel through the tough terrain that cyborgs riding on tracks or wheels cannot handle. However, the researchers claims that the Raptor can function in dirt, gravel or rocky terrain.