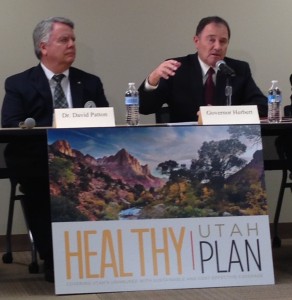 A poll of Utah voters, published on Thursday, confirms that the vast majority of voters in Utah approve of Governor Gary Herbert’s alternative solution to providing medical coverage to the uninsured population of the state. The poll in question benefited from the response of 623 voters in Utah, selected randomly. When asked if they preferred Gov. Herbert’s plan to doing nothing, 88 per cent of voters replied in the affirmative. What’s more, 70 per cent opted for Gov. Herbert’s solution, in favor of a full expansion of Medicaid.

The results of the poll were analyzed by Notalys, a consultancy company in Utah. Following the analyses, in a communication session to explain the results, company partner and chief economist Sven Wilson explained that the show of support for Gov. Herbert’s plan is massive, extends across all demographics, and even spans “across the political spectrum”. Wilson, who also teaches political science at BYU, explained that most Utah voters support the minutiae of Herbert’s plan. Among other measures, the Governor’s proposed solution favors individual responsibility and offers a pay-what-you-can model of medical insurance. According to the provisions of the plan, currently uninsured Utah inhabitants can select medical coverage plans offered on the private market.

However, the poll’s result should not be interpreted as a vote against the involvement of federal authorities in providing medical coverage to the currently uninsured. As a matter of fact, 71 per cent of the people polled think it’s perfectly acceptable for the state to receive assistance for medical care from the federal authorities. Moreover, 83 per cent of respondents believe all legal residents of Utah deserve access to healthcare, even though 9 per cent of them are still uninsured, even in the aftermath of the launch of www.healthcare.gov.

It’s important to note that Gov. Herbert’s Healthy Utah plan has not been suggested as another alternative of expanding Medicaid. Rather, it’s a way of securing federal funds for the state of Utah, in order to enforce a program that participants would pay for, to the best of their abilities. Under the provisions of this plan, participants would receive access to medical coverage via insurers on the private market. This measure would secure business for the local health funds, as well as provide coverage for adults that earn low incomes and live below the 138 per cent federal poverty threshold. Wilson explained that, in a conservative state such as Utah, it’s only normal for residents to uphold an plan based on individual responsibility. However, he also added that “even among that group there is still surprising support for the Healthy Utah plan among both Democrats and Republicans.”