You are here: Home / National News / Utah Summer Games Kicks off on a Grand Note

The lighting of the cauldron with Olympic music at the background marked the official beginning of the 29th Utah Summer Games on Thursday evening.

The Opening Ceremonies kicked off at Southern Utah University’s Eccles Coliseum in Cedar City. Hundred American flags lined along the track at the Coliseum served as a backdrop to the march of athletes, who paraded behind banner bearers advertising each sport in the games.

It was a full entertainment day when the Beatles tribute band, the Return, took the centre stage. The Return played Beatles hits while dressing up in costume to portray the different time periods of the band.

It is noteworthy, the band is back by popular demand, as they performed in Cedar City earlier this year in late March.

“We had a great time, the crowd was pretty amazing at the last concert we were at and we had a blast and I think everybody there did as well. So we are really looking forward to coming back,” Michael Fulop, member of the Return and portrayer of George Harrison said. 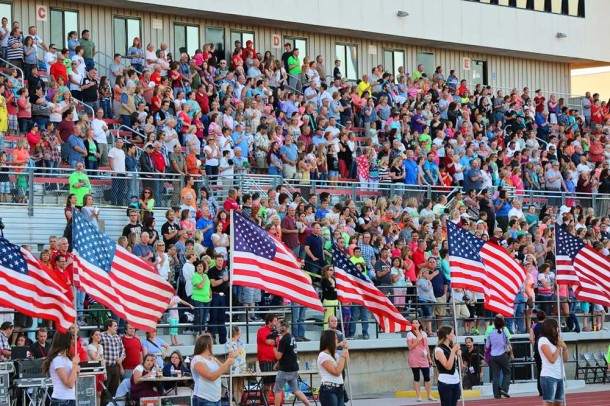 Expressing gratitude to the awesome audience, another band member Richard Stelling, who portrayed John Lennon, said, “The young crowd was totally unexpected. They seemed really excited as they sang and danced to the songs. It made for a cool experience.”

Summer Games Director Casey McClellan said, “I thought they were really good. One of the things we try to find is a group that can play to all ages and I think the young kids seemed to be having a lot of fun out there, a lot of folks in the stands were singing along – that’s really what we were looking for and I think overall it was really popular.”

Leo proceeded to jump 30 feet off of the center onto pads waiting below where kids welcomed him as he shot Real Salt Lake t-shirts into the cheering crowd. 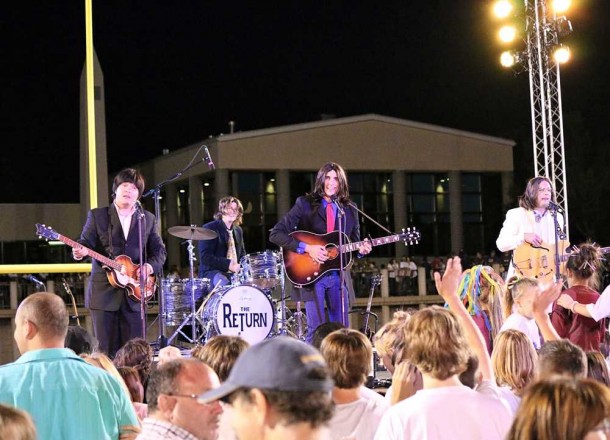 The Opening Ceremonies closed with the firework show, perhaps the most popular event of the ceremonies.

“The fireworks are the best, it’s fun to see the kid’s reaction to them,” Smithfield resident Brad Stull said, “they just look forward to them all day long.”

You can check for latest Utah Summer Games updates online.