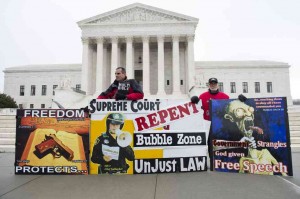 The Supreme Court reached a seminal decision for the life v. choice debate on Thursday, when it annulled a Massachusetts law against speech around abortion facilities. According to the law in question, speech was prohibited within a ‘buffer zone’ around such clinics, stretching out for 35 feet from the clinics’ doors. The buffer zones would extend into public areas, such as sidewalks and streets. According to the Supreme Court’s unanimous decision, the law was found to be unconstitutional, specifically violating the First Amendment, which guarantees the right to free speech.

Abortion advocates decried Thursday’s decision by stating it puts abortion clinic patients around the country at high security risks. Similar buffer zones have been set up in other U.S. states, but they’re typically smaller and only extend for 8 to 15 feet around the clinics. The decision taken by the Supreme Court on Thursday will have no direct and immediate impact on the buffer zones set up in other states and cities around the country. The Supreme Court Justices also added that more limited restrictions could still be enforced in Massachusetts. Yet Roger Evans, the senior counsel at the Planned Parenthood Federation of America, implied that the Court’s decision could see them all struck down. “If you were a betting man, you would bet that they’ll all go,” Evans stated in the wake of the announcement that made the decision public.

On the other hand, opponents of abortion heralded the decision of the Supreme Court as a victory for free speech. Their representatives claimed that the verdict enforces their right to protest peacefully in the immediate vicinity of clinics that perform abortions. Some also added that the decision might lead to a reexamination of similar laws, enforced in other states in the U.S..

Representatives of the Obama Administration argued in favor of the Massachusetts buffer zone in court. Following the announcement, White House representatives stated they would continue to support the existence of such zones and would endorse any efforts to set up alternative zones in this state. Josh Earnest, the White House Press Secretary, said that the current administration will continue to committedly support the enforcement of the law to its fullest extent. “While the court disagreed on this specific law, we are pleased that their ruling was narrow and that they recognized the possibility of alternative approaches, such as the federal law protecting a woman’s right to access reproductive health clinics,” Earnest stated on Thursday.