The health experts have time and again warned against the health hazards of sun exposure. Exposure to sun for longer duration has often been linked with high risk of developing skin cancer and related troubles.

But the researchers were amazed by the fact that despite knowing the health issues related to sun exposure people love sitting under sun for the reasons best known to them. They assume the tendency may be because our bodies become addicted to the feel-good hormones that are released through exposure to ultraviolet (UV) radiation.

“This craving may guide individuals to actively seek out UV rays that are responsible for increasing a person’s risk for skin cancer and melanoma,” experts believe. 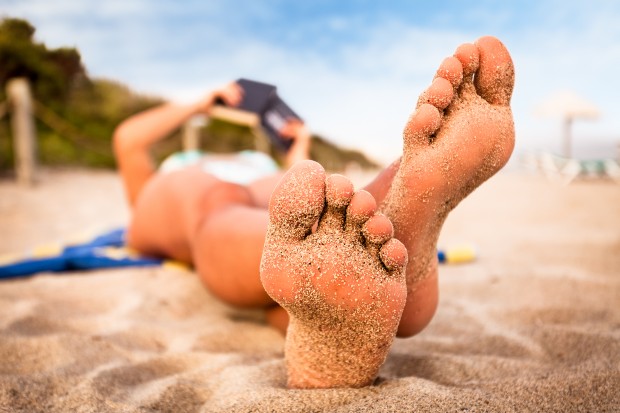 An American Cancer Society (ACS) report has showed that about 76,100 new cases of melanoma will be diagnosed in 2014.

Senior study author Dr. David E. Fisher, chairman of the department of dermatology at Massachusetts General Hospital (MGH) and Harvard Medical School, said, “The linkage between all common forms of skin cancer and UV is very firmly established and has been known for many years. On the one hand, we know a huge amount of what causes [skin cancer], and you’d expect the incidence to be falling. In fact, epidemiological data shows not only that it’s rising, but rising with a steeper slope than any other cancer.”

Sun’s rays are considered to be the greatest source of Vitamin D and therefore people prefer taking sun bath to suffice their low levels.

According to Fisher, such argument really doesn’t hold water anymore.

He says sun is not the safe method to get vitamin D, a vital component for bone health and calcium regulation, as a wide range of variables such as time of day, season, location, clothing and skin pigmentation make sunlight an unreliable source.

For the study, the researchers exposed shaved mice to low doses of UV light for six weeks. After the completion of one week, the researchers found that the endorphin levels in the bloodstream increased. The mice were then tested for common symptoms linked to opioid signaling like low sensitivity to touch and temperature.

The researchers found that the mice had become numb to sensory input. When the mice were put on an opiate-blocking drug to lessen the effects of the increased endorphins, the numbness was instantly reversed, said the researchers.

“It was the first clue that UV radiation was affecting real opiate signaling to the level of being able to perceive or act on a sensory input,” Fisher, who is also director of the melanoma program at the MGH Cancer Center, said.

UVA rays are rays with longer wavelengths, having more penetration capability in the skin and can even pass through window glass. UVB rays are stronger in the summer and are the key reason behind sunburn.

The study was published in the journal Cell.