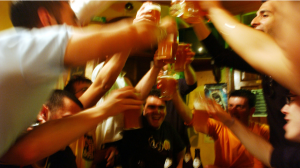 A recent study published by the United States’ Center for Disease Control confirms the long held assumption that binge drinking is one of the determinant factors of death for adults of working age in the U.S.. The findings of the research state that some 10 per cent of all deaths recorded among working age adults can be chalked up to drinking in excess.

The study in question was published in the academic journal Preventing Chronic Disease. According to the report, almost 88,000 adult deaths per year, of all those each recorded from 2006 to 2010, had something to do with either excess drinking or with regular heavy drinking. The report also confirmed the fact that binge drinking cuts one’s life expectancy short by 30 years. The study was conducted with the aid of the Alcohol Related Disease Impact tool. This research instrument gathers nationwide statistics on deaths, both from local, as well as from state authorities. It then attempts to determine how many of those deaths can be put down to the long term effects of alcohol, such as liver diseases. It also takes into account deaths caused by alcohol poisoning and drunk driving. It accounts for 54 different alcohol-related causes of death, including breast and prostate cancer. The process of working out the final numbers involved multiplying the “alcohol-attributable fraction” for each cause of death by the number of deaths recorded each year, from 2006 to 2010. The age-adjusted number of alcohol-related deaths per 100,000 U.S. citizens is 27.9. Of the victims, 71 per cent are men, 69 per cent are adults ages 20 to 64 and 5 per cent are people aged younger than 21. Almost 1 in 10 working age adult deaths in the U.S. can be traced back to alcohol, says the study.

According to the study, excess drinking erased 2.5 millions of lifespan within a single year. Had the victims refrained from binge drinking, they would have lived all those years, instead of succumbing to liver cirrhosis, or any other number of causes linked to excessive drinking. In fact, of the nearly 88,000 deaths per year, which are caused by alcohol in one way or another, over half of them are directly caused by binge drinking. In the authors’ view, drinking five or more drinks in a row for men and for or more drinks in one sitting for women constitutes binge drinking. The costs of drinking in excess are $223.5 billion per year, according another report, published in 2013 in the American Journal of Preventive Medicine.