Physicists at the University of Rochester have created a silicon nanocavity that allows light to be trapped longer than in any other similar sized optical cavities. They achieved a 10-fold improvement on the performance of previous nanocavities using an innovative design approach that mimics evolutionary biology. In a paper published in Applied Physics today, the scientists demonstrate confined light in a nanocavity for nanoseconds.

Typically light would travel several meters in that time but instead the nanostructure confined light in a region no bigger than one hundredth the width of a human hair, roughly one-half millionth of a meter. Nanocavities are key components of nanophotonics circuits and researchers explain that this new approach will help implement a new generation of highly integrated nanophotonics structures.

“In order to build a quantum computer, we not only need to be able to control complex phenomena such as entanglement and mixture but we need to be able to do this on a chip, so that we can practically duplicate many such miniature circuits in the same way as the modern computers we have today,” says Professor Jeremy O’Brien, Director of the Centre for Quantum Photonics. “Our device enables this and we believe it is a major step towards optical quantum computing.” 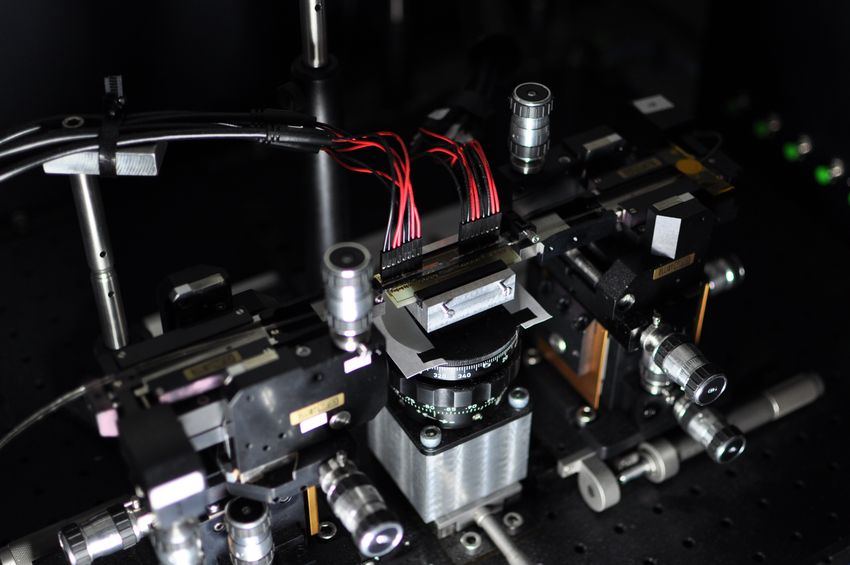 The chip consists of a network of tiny channels which guide, manipulate and interact single photons—particles of light. Using eight reconfigurable electrodes embedded in the circuit, photon pairs can be manipulated and entangled, producing any possible entangled state of two photons or any mixed state of one photon. “It isn’t ideal if your quantum computer can only perform a single specific task”, explains Peter Shadbolt, lead author of the study, which is published in the journal Nature Photonics. “We would prefer to have a reconfigurable device which can perform a broad variety of tasks, much like our desktop PCs today—this reconfigurable ability is what we have now demonstrated. This device is approximately ten times more complex than previous experiments using this technology. It’s exciting because we can perform many different experiments in a very straightforward way, using a single reconfigurable chip.”

The researchers, who have been developing quantum photonic chips for the past six years, are now working on scaling up the complexity of this device and see this technology as the building block for the quantum computers of the future.

Integrated nanophotonics is a new and rapidly growing field of research laying at the intersection of photonics, nanotechnology, and materials science. In the near future, nanophotonics circuits will enable disruptive technologies ranging from telecommunications to biosensing, and because they can process pulses of light extremely fast and with very low energy consumption, they hold the potential to replace conventional information-handling systems.

The results shown by the researchers demonstrate one of the highest quality factors ever measured in nanocavities while maintaining a very small footprint. By keeping the nanocavities so small while trapping light so efficiently it becomes possible to create devices with ultra-dense integration, a desired characteristic in the fabrication of optical nanocircuits.

The extreme sensitivity of these nanocavities towards tiny changes in the environment, for example a virus attaching near the area where light is trapped, makes these devices particularly appealing for biosensing. By using these highly sensible nanocavities, such a biosensing device could detect minute quantities of these biomaterials by analyzing a single drop of blood. The group is now starting a collaboration with researchers at the University of Rochester’s Medical Center to exploit this interesting property with the new nanocavities.