You are here: Home / Tech & Science / Sea-Monsters used to row a long way for their prey

The recently found tracks are predicted to be formed by the ancient sea monsters called as “nothosaurs”. Nothosaurs are one of the most dangerous sea predators Triassic period. Triassic period was the era which had lasted from 250 million years to 199 million years. This new research had answered many complicated questions regarding the swimming nature of ancient sea animals.

Nature Communications – a popular multidisciplinary journal which published an elegant data on natural sciences had published a very detailed report on the newly found paddle tracks by the ancient sea monsters.

Nothosaurs were the most unconventional looking marine animals which had restlessly prowled the oceans during Triassic period 250 million years ago. These dangerous marine reptiles are gifted with long tails, unusual posterior limbs, paddle like forelimbs and long necks. 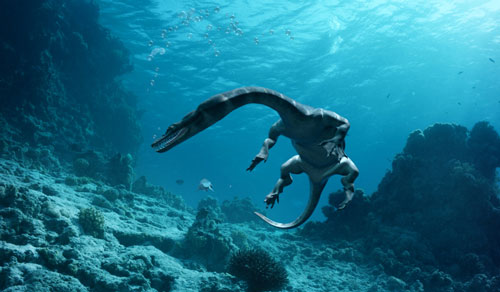 One of the chief members of China Geological Survey Chengdu Centre, was the first person to discover these track marks when he was mapping the Yunnan region in China which is well known for its extraordinarily fossilized sea animal species. Almost 15 different track ways with the paddle marks were found out when they dug up the region.

The team had deduced some important conclusions after examining the tracks. They concluded that the fish and lobsters got churned up due to the gigantic rowing motion by the Nothosaurs. This new discovery throws light on ecological systems which were existing millions of years ago, when almost 90 percent of the sea creatures and more than 70 percent of the land animals were extincted.