Sabra Blumhorst ,31 and Chelsea Baker ,24 exchanged wedding vows in November  near their Southern Illinois home. Though their nuptials weren’t legally recognized in Illinois.

Same-sex marriage is recognized by the U.S. state of Illinois by means of a law signed on November 20, 2013 by Governor Pat Quinn. Last June, key provisions of the Defense of Marriage Act were declared unconstitutional by the US supreme court.

Out of 102 counties, sixteen counties began issuing licenses early, including Cook County where  Chicago is located and the couples were allowed to marry immediately as per the U.S. district court judge rulings on February 21, 2014.

llinois become the 16th state in the union to allow same-sex marriage after signing the Religious Freedom and Marriage Fairness Act.

The law gives permission to perform same-sex and opposite-sex couples to form civil unions and provides state recognition of substantially similar legal relationships, including same-sex marriages and civil unions, entered into in other jurisdictions.

“I felt very strongly that if we can’t be married-married, I’m not going through the steps of the interim process of separate but equal,” Blumhorst, who now uses the surname of her five-year partner, said Wednesday. “I wanted complete equality, and we decided to wait.”

County clerks’ offices will be issuing licenses on Sunday for those who couldn’t wait till Monday morning. Montgomery County’s Sandy Leitheiser is among them sacrificing her Sunday.

“I’m here to uphold the law of Illinois,” Leitheiser said, “and if there’s a way to accommodate couples based on need and special circumstances, I’m available.”

“I do not think we will have the rush that Chicago had, and other big cities had,” Kane County Clerk Jack Cunningham said.

Cook County Clerk David Orr said he expects a stable stream of people who want to make the change, but not that panic that occurred when same-sex couples could first get married in the state. 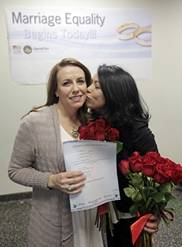 The laws says that a couple must have a civil union converted into a marriage in the county where they received the civil union.

“Primarily it’s been couples who already have a civil union and are trying to convert it,” King said.

The civil union couples may not receive the same insurance benefits, survivor benefits or next-of-kin rights, and some states might not recognize the status of a civil union outside of their state.

The marriage license obtained will have a validity of 60 days and the marriage certificate must be completed by official such as a judge or minister to confirm the marriage. The certificate should be then returned to the county clerk within 10 days of the wedding.

Legalizing gay marriage “is really a tremendous step forward,” Cole said. “Does that mean that from coast to coast and across the board, we’re going to experience equality? Of course not. That will take time.”