You are here: Home / National News / President Obama to Nominate Robert McDonald to Run the VA 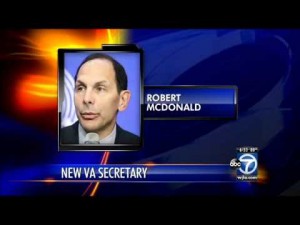 It is an important day today in the history of the Veteran Affairs and that of Robert McDonald, former Procter&Gamble CEO and apparently future secretary of the controversial VA Department.

President Obama is pretty much in favor of Robert McDonald to run the VA and it seems the man has a lot of supporters in the House. If the Senate confirms the nomination, McDonald will have a lot of work to do to clean up the VA, restore its reputation and manage it properly.

In case you don’t know, the Veterans Affairs Department was subjected to scandal and ugly stories about mismanagement, falsification, corruption and incredible mal praxis cases. Former manager of the VA, general Eric Shinseki, resigned last month when the scandal hit the fan.

Among the most grave charges the Veteran Affairs faced was that 35 veterans were left off a list, never saw a doctor and died. Now we don’t know that they died because they never received the appropriate health care in due time, but once you put two and two together, you realize thing got pretty bad over there.

Now Robert McDonald is the presidential choice to do the Herculean work of cleaning up the mess. Pardon the pun, but a CEO who had the job of selling detergents is perhaps the best man to clean the Veterans Affair of all bad seeds and toxic cultures. Or is he?

There are some in Washington who praise McDonald, as a West – Point man, a man of honor, loyalty and greatness, both as a soldier and as a corporate professional. Phillip Carter, who is associated with the Center for a New American Security, considers that the idea of McDonald to run the VA is strategically good:

McDonald is right in the sweet spot of the current four-stars in the Pentagon. He’s got that social connective tissue with them. The VA is more like a big business than a military organization, so his background probably makes him more qualified to run the VA than a retired general officer.

McDonald also may speak the same language with younger veterans, the ones fighting in Iraq and Afghanistan, but how he will manage to bring them on the same page is hard to predict for now. While his results as a Procter & Gamble CEO weren’t quite spectacular, on the contrary, he proved himself a man of hard work, commitment, high values and loyalty. It seems that these exact qualities recommend him for the new position as the secretary of Veteran Affairs.
Some may still look at McDonald with a distrusting gaze, as selling diapers and running a troubled healthcare system are very different meal courses, but at the end of the day, a good corporatist and managerial vision with strong military backup might do the trick in saving what’s left of the VA. Let’s stay tuned to the news and see how things evolve!