You are here: Home / National News / President Obama All Set For Mission “Save The Bees” from Extinction

The White House has formed a new task force Friday to study and combat America’s declining honey bee population. On Friday orders were issued to the environmental regulators to review the effect that pesticides may be having on bees and other pollinators.

The Pollinator Health Task Force will also be responsible to undertake efforts to increase public awareness of the issue and boost conservation partnerships between the public and private sectors. “Given the breadth, severity, and persistence of pollinator losses, it is critical to expand Federal efforts and take new steps to reverse pollinator losses and help restore populations to healthy levels,” President Barack Obama wrote in a presidential memorandum. 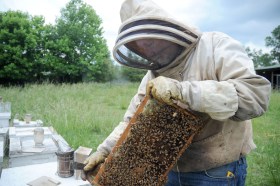 In a statement released on Friday, the president explained the importance of bees in US agricultural crops. At least 90 commercial crops harvested in North America rely on honey bees including nuts, fruits, and vegetables, according to a White House fact sheet.

The President requested $50 million to combat the program in his 2015 budget proposal. In total representatives from 15 government agencies and departments will be involved in the force, including the departments of state, defence, national security and science and technology.

Research of bees and butterflies points to a combination of stresses, including parasites, pathogens and exposure to pesticides widely used in farming.

The government’s new plan calls for the Environmental Protection Agency to “assess the effect of pesticides, including neonicotinoids, on bee and other pollinator health and take action, as appropriate,” within 180 days. The US Department of Agriculture also directed an extra $8 million toward a program in some midwestern states to cultivate new habitats for honey bees.

“President Obama’s announcement on protecting pollinators does not go far enough,” said Erich Pica, president of Friends of the Earth. “The administration should prevent the release and use of these toxic pesticides until determined safe.”

Larissa Walker, head of the Center for Food Safety’s pollinator campaign, said the announcement was “on the right track,” but expressed concern. “Assessment and habitat building alone won’t save our pollinators. We need decisive action on pesticides,” she said.

“We look to the Obama administration for leadership that will have the lasting impact we need to keep our pollinator populations sustainable and healthy.”