For the first time, scientists from the CMS experiment on the Large Hadron Collider (LHC) at CERN have succeeded in finding evidence for the direct decay of the Higgs boson into fermions. Previously, the Higgs particle could only be detected through its decay into bosons.

“This is a major step forwards,” explains Professor Vincenzo Chiochia from the University of Zurich’s Physics Institute, whose group was involved in analyzing the data. “We now know that the Higgs particle can decay into both bosons and fermions, which means we can exclude certain theories predicting that the Higgs particle does not couple to fermions.”

As a group of elementary particles, fermions form the matter while bosons act as force carriers between fermions. According to the standard model of particle physics, the interaction strength between the fermions and the Higgs field must be proportional to their mass. 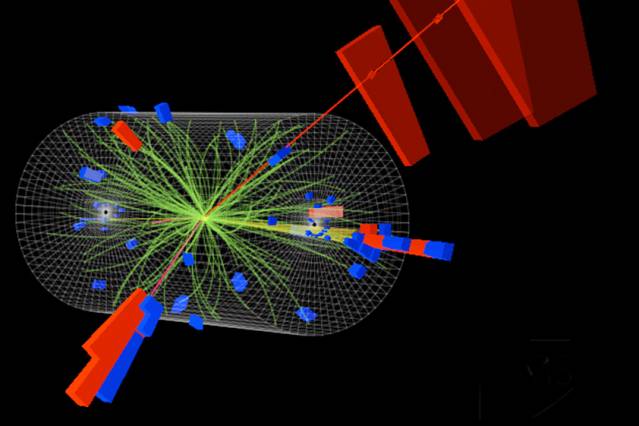 “This prediction was confirmed,” says Chiochia; “a strong indication that the particle discovered in 2012 actually behaves like the Higgs particle proposed in the theory.”

The discovery of a new boson with a mass of approximately 125 GeV in 2012 at the LHC has heralded a new era in understanding the nature of electroweak symmetry breaking and possibly completing the standard model of particle physics.

Since the first observation in decays to gamma, WW and ZZ boson pairs, an extensive set of measurements of the mass and couplings to W and Z bosons as well as multiple tests of the spin-parity quantum numbers have revealed that the properties of the new boson are consistent with those of the long sought agent responsible for electroweak symmetry breaking.

An important open question is whether the new particle also couples to fermions and in particular to down-type fermions, since the current measurements mainly constrain the couplings to the up-type top quark. In this paper we report the combination of these two channels which results for the first time in strong evidence for the direct coupling of the 125 GeV Higgs boson to down-type fermions with an observed significance of 3.8 standard deviations when 4.4 are expected.

“In nature, there are two types of particles: fermions and bosons,” said Ketino “Keti” Kaadze, a research associate at Fermilab who in August is joining the faculty at Kansas State University’s physics department. “Fermions, quarks and leptons make up all the matter around us. Bosons are responsible for mediating interaction between the elementary particles.”

The CMS detector measures the energy and impulse of photons, electrons, muons and other charged particles with high precision. Different measuring instruments are arranged in tiers inside the 12,500-ton detector. 179 institutions worldwide are involved in the construction and operation of the CMS detector. The Swiss institutions are the University of Zurich, ETH Zurich and the Paul Scherrer Institute, which jointly developed and constructed the CMS pixel detector.

Study was published in the Nature Physics Journal.