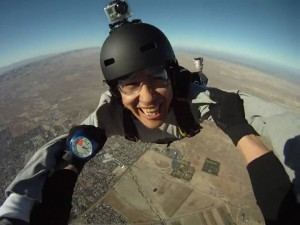 By and large, the share market for cameras is complex, dynamic, and difficult to conquer. However, start-up GoPro saw its shares boom by an impressive 32 per cent within its very first day of public trading.

The company, now in its tenth year of existence, initially put a $24 price tag on each of their IPO shares on Wednesday. The move was considered bold, as the pricing gravitated toward the higher end of the $21 to $24 price range the market was expected. As such, when they first started trading on Thursday morning, under the GPRO ticker name, they were valued at almost $3 billion on the Nasdaq stock market. And they clearly proved they can make good on their value, by having individual stock prices shoot up to $33 by the earlier hours of the afternoon. Company shares closed at $31.34 on Thursday.

The company, based in San Mateo, California, revolutionized the photography market both for amateurs, as well as for professionals, for videographers, photographers, and extreme sports aficionados alike. Thousands of videos taken with GoPro cameras have been uploaded online in the past decade – and they feature anything and everything, from toddlers to kittens to skydivers, skateboarders and surfers. Perhaps the biggest advantage to using such cameras is that they’re compact, easy to use, and easy to mount on top of helmets, onto bike handlebars, and just about anywhere else. They are highly durable, not at all complicated in terms of controls, and have a very accessible learning curve where usability is concerned. Most importantly, they can withstand any kind of impact, no matter how harsh, and don’t take up too much space.

The company’s IPO documentation stands as proof for its success. According to the papers, GoPro has seen its revenue grow sequentially over the past three years. They made $985.7 million in revenue in 2013, up from $526 million in 2012, and $234.2 million in 2011. Another exciting thing about their early success on the stock market is that they are going head to head with such tech giants and household names as Canon, Olympus, Nikon, and Pentax. The companies in question have been asserting their indisputable domination for the past several decades, yet, in the meantime, have seen little competition, from the likes of Samsung and Sony. GoPro’s success goes to show that finding your own niche in such a market is essential – even on a market that’s been slowly taken over by smartphones.