It appears that the Federal Communications Commission has finally agreed to step in – at least in an investigative capacity into the battle that has raged on for quite some time now between Netflix and a handful of big name ISPs (Internet Service Providers).

“The agency will be investigating the situation with the aim of protecting Internet consumers”, FCC Chairman Tom Wheeler explained in an official statement today. He further added “Consumers must get what they pay for. I have therefore directed the Commission staff to obtain the information we need to understand whether consumers are being harmed.” Furthermore, Wheeler claims that, at his direction, “Commission staff has begun requesting information from ISPs and content providers. We have received the agreements between Comcast and Netflix and Verizon and Netflix. We are currently in the process of asking for others.”

It’s probably safe to say that sluggish Netflix streaming speeds were the spark that lit the fuse as the exact moment in which this backyard brawl initiated is hard to pinpoint. 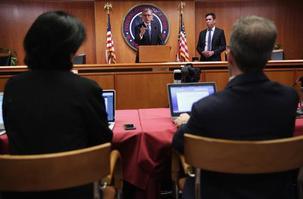 An overall slowing of the service’s streaming speeds was indicated by Netflix’s monthly ISP Speed Index on several major ISPs at the very beginning of this year. In an effort to resolve the speed issues Netflix opened up a big ol’ can of worms when it Comcast.

The exchange for restored streaming speeds in Verizon and AT&T predictably followed suit with similar requests for cash in soon. In actuality in the long term, these deals haven’t done a whole lot for Netflix. Sure, after the cash deal Comcast rose in the ranks of the service’s Speed Index for two straight months , but has since lost footing. Dropping to number 10 Verizon’s FiOS service has fared even worse since managing to coax cash from Netflix.

However, Netflix is not the only one pointing fingers. Back in April, claiming it was “Netflix’s commercial transit decisions that created these issues”, Comcast returned fire against Netflix’s poor view ability claims .

Prompting a cease and desist order from Verizon, the latest drama came when Netflix began calling out Verizon’s sluggish streaming on its trademark red buffering screen. Against the unfavorable backdrop of wedding all of this bickering, sniping, and accusation-slinging has occurred, which has instigated an entirely different beast of a controversy, though the two issues are certainly joined at the hip.

According to Wheeler, he and the Commission won’t be intervening simply to hand down a blanket ruling that will somehow solve everything in one fell swoop. In a statement Wheeler notes, “To be clear, what we are doing right now is collecting information, not regulating,” “We are looking under the hood. Consumers want transparency. They want answers. And so do I.”