A new study released this week led by the University of Minnesota found out that emperor penguins, at least, may be more adaptable than previously expected. It turns out that these penguins are more willing to locate in the face of changing temperatures.

Earlier it was thought that the emperor penguin were philopatric that means they return to the same spot, every year to nest and that they are endangered by climate change. New high resolution satellite imagery of Pointe Géologie and the surrounding arctic regions however, shows that both of these things may be wrong.

The research presented at the IDEACITY conference in Toronto on June 21, confirms that penguins are a lot smarter

than they look, according to a press release issued by the University of Minnesota. 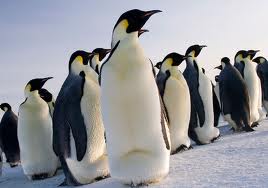 According to the researchers, in the late 1970s, penguin populations around Pointe Géologie have declined by more than half, with colonies slowly disappearing. It was assumed that warming oceans were causing that decline. The “March of the Penguins” colony is called Pointe Géologie.

“It’s possible that birds have moved away from Pointe Géologie to these other spots and that means that maybe those banded birds didn’t die. If we want to accurately conserve the species, we really need to know the basics. We’ve just learned something unexpected, and we should rethink how we interpret colony fluctuations,” said Michelle LaRue, University of Minnesota College of Science and Engineering researcher and lead author of the study, in a statement.

“If we want to accurately conserve the species, we really need to know the basics. We’ve just learned something unexpected, and we should rethink how we interpret colony fluctuations,” the author said in a statement.

The researchers found six instances in three years in which emperor penguins did not return to the same location to breed. One newly discovered colony on the Antarctic Peninsula that may represent the relocation of penguins was also reported.

The study will be published in an upcoming issue of Ecography.