You are here: Home / Health / Development Of Bionic Pancreas’ for Diabetics In Progress

Major progress has been made by the scientists in the development of ‘‘bionic pancreas’’ which will dramatically change the treatment of type 1 diabetes.

The artificial pancreas has been designed to take over the job of providing insulin on a minute-by-minute basis in case of failure of body’s real organ.

The mechanical device is worn outside the body. The device has been designed by Edward Damiano, an associate professor of biomedical engineering at  Boston University who has worked on the technology since his 15-year-son was diagnosed with type I diabetes as an infant.

Children with type 1 diabetes are eight times more likely to die from severe hypoglycemia ( a condition of dangerously low sugar level in blood at night) — called dead in bed syndrome — than in a car accident. 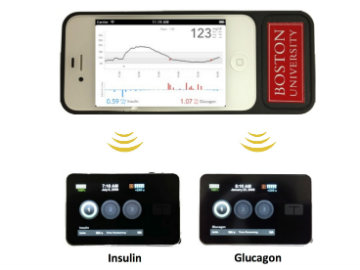 Investigators from Massachusetts General Hospital and Boston University developed the experimental device, and it has an automated pump that releases the hormones insulin and glucagon and a glucose monitoring system controlled by an iPhone app.

“We encouraged them to eat whatever they wanted while they wore the bionic pancreas,” said Dr. Steven Russell, an endocrinologist at Massachusetts General Hospital who led the study. “They went on a diabetes vacation, eating ice cream, candy bars, and other things they normally wouldn’t eat — like taking out a new sports car and seeing what it can do.”

The device improved blood-sugar control more than standard monitors and insulin pumps when the mobile system was used for five days by 20 adults and 32 teens.

“This is not a cure,” said study  Damiano. “It’s taking diabetes management to its ultimate potential and unburdens people with type 1 diabetes from thinking about all the things that go into managing diabetes every day of their lives.”

“Quite a few things need to be addressed,” added Dr. David Harlan, chief of the diabetes division at the University of Massachusetts Medical Center in Worcester to promote more rigorous testing of the device. “The chances of the pump failing with two difference hormone infusions are great and it doesn’t remove constant diligence from lives of people with diabetes.”

The fact that the U.S. Food and Drug Administration allowed testing in 52 people, including children, suggests it’s advanced and safe, said Betul Hatipoglu, an endocrinologist at the Cleveland Clinic who wasn’t involved in the study.

The device comprises of  three parts: two cellphone-sized pumps for insulin and sugar-raising glucagon, and an iPhone wired to a continuous glucose monitor. Three small needles go under the skin, usually in the abdomen , to connect patients to the components, which can be kept in a fanny pack or a pocket.

Colby Clarizia, one of the study participant, said while the device was on he consumed three blueberry muffins for breakfast and was surprised to see how well the device functions. The 21-year-old from Amesbury also found it easy to use.

“Instead of measuring every carb in a glass of milk or serving of rice, I just had to input whether I was going to eat a large meal or small one,” he said.

The device isn’t being tested on people with the more common Type 2 diabetes.

“I think it’s an important step forward, but it’s going to be quite challenging to see whether this device can function safely and effectively without close supervision,” said Dr. Howard Wolpert, director of the institute for technology translation at the Joslin Diabetes Center in Boston, who reviewed the paper before publication. “An analogy I would present is that they climbed a flight of stairs but now the next stage will be like climbing a hill or even a mountain.”