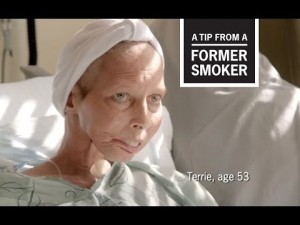 Anti-smoking campaigns are not supposed to be fun, easy to watch, or enjoyable, but the latest ad campaign from the U.S. Centers for Disease Control and Prevention might just be too much, say media reports. The campaign was released on Tuesday under the title “Tips from Former Smokers”. It includes several ads featuring a middle aged couple, both of them toothless because of smoking, a male whose throat has a hole in it, owing to the same habit, and a mother who gave birth before term – you’ve guessed it! – also because of smoking.

Another jarring apparition in the ad series is Terrie Hall, from North Carolina, who was previously featured in a similar campaign. Hall, aged 53, recently died of oral and throat cancer. Before her demise, she also experienced the loss of her larynx. The previous videos that she shot for the CDC were viewed over 2 million times – a number which made them the most watched videos in the respective campaign, according to the CDC’s Smoking and Health Office director Tim McAfee. During the press conference that announced the launch of the campaign, McAfee revealed that Hall wanted to be filmed for these new ads. According to the CDC director, the woman “demanded that we come and film her for this ad just days before she passed away”. The ad features the woman on her hospital bed, saying that she doesn’t want anyone else to go through experiences similar to hers.

CDC representatives have said that, tough as the ads might be to watch, they have proven to be effective thus far. The organization’s director, Tom Frieden, issued a statement to mark the launch of the campaign. In it, he says: “smokers have told us these ads help them quit by showing what it’s like to live every day with disability and disfigurement from smoking”. Regarding the necessity to continue this $50 million campaign, launched in 2012, CDC officials say there’s still a clear need for it in the U.S.. The number of smokers has been declining in the United States, over the course of recent years. However, current data says 18 per cent of American adults still smoke tobacco cigarettes, while 21 per cent of all U.S. citizens use a form of tobacco-based product on a daily basis, or on most days. The CDC launched the report containing this data on the same day as the new anti-smoking campaign.

The nine week long campaign will start airing on July 7. It will be broadcast on TV, the radio, online, and in movie theaters. Print ads will be run in magazines, in newspapers, and on billboards. You can read the participants’ stories on the CDC website.