Cerro Armazones, a mountain in Chile exploded as the peak of its structure was torn asunder by massive forces. But this destruction was man-made and done in the name of science.

The blast was part of a groundbreaking construction of the world’s largest telescope and was streamed live for viewers to watch online. Although many viewers hoped for a more dramatic show, the live stream showed just a puff of smoke and debris on a distant mountaintop. Around 55 feet of the mountaintop was removed and subsequent blasts will help clear remaining rock and ledges. Builders estimate a total of 1,750 tons of debris will be removed from the site before demolition is complete.

The European Extremely Large Telescope (E-ELT) will have a main mirror 128 feet across. This will allow the telescope to gather an unprecedented amount of light providing images of objects to dark and distant to be seen by current observatories. By comparison, the ultra-modern Keck Observatory in Hawaii has mirrors just 33 feet from side to side. 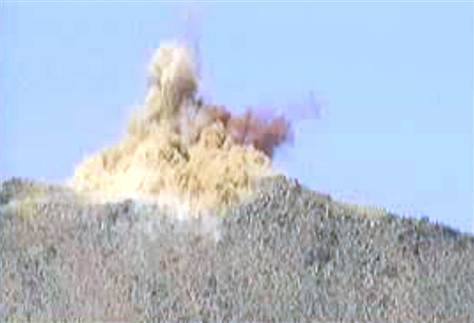 The 40 meter-class telescope can collect thirteen times more light than any comparable telescope in the world. When operational, the E-ELT’s location in a privileged zone for optical astronomy with 89% cloudless nights a year should deliver images 16 times sharper than those from the orbiting Hubble space telescope.

The E-ELT will be able to see the birth of stars and galaxies in amazing detail. It will be so powerful it can collect enough light to look to the observable limit of the Universe or immediately after the Big Bang when the first stars and galaxies formed.

“Currently, we have no proof of the existence of an Earth like planet at the same distance from the sun in our galactic neighborhood,” said astronomer Fernando Comeron, ESO’s representative in Chile. “That’s not because they don’t exist but because we didn’t yet have the tools to detect them. With the E-ELT, we can.”

Construction will take an estimated 10 years and the telescope will be put into service two years later.

The first step, estimated at $1.4 billion involves razing around 5,000 cubic meters of rock off the top of Mount Armazones. The newly flat surface will support the foundation of a main mirror which will be 39 meters in diameter.

“The new telescope’s light-collecting surface will be 10 to 15 times greater than those of existing telescopes,” Comeron said.

Thanks to its dry and cold climate and the lack of light pollution from cities in the remote region, Chile’s Atacama Desert provides an ideal location for astronomical research.

The European Southern Observatory (ESO) which is building the telescope has 15 member states including UK. The project will cost more than a billion euros.