Many bizarre incidents can happen at bachelor parties, but discovering an ancient fossil isn’t usually one of them. Well, that was the case for a group of campers celebrating a bachelor party at a New Mexico state park Monday, who stumbled upon the fossil of a 3-million-year-old elephant-like creature called a stegomastodon.

The Las Cruces Sun-News reported on Thursday that the paleontologists were at the scene near Elephant Butte Lake and determined that the stegomastondon was about 50 years old when it died, and called the discovery a major find. 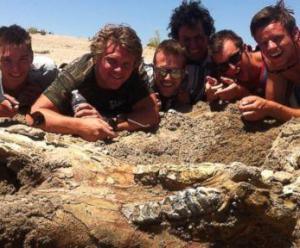 “As we are cruising by we saw a large tusk, or what seems to be a large tusk coming out of the ground about three to four inches,” Antonio Gradillas, a member of the bachelor party told KRQE.com.

Gradillas and his friends started digging, turning this bachelor party into an archaeological dig. They soon alerted the New Mexico Natural History Museum of their discovery.

At first they thought it was a woolly mammoth but paleontologists who later arrived on the scene concluded that it looked more like a stegomastodon – a 9-foot tall, 13,000-pound prehistoric elephant and an ancestor of modern elephants that roamed the subtropical area in North America around 15 million years ago. 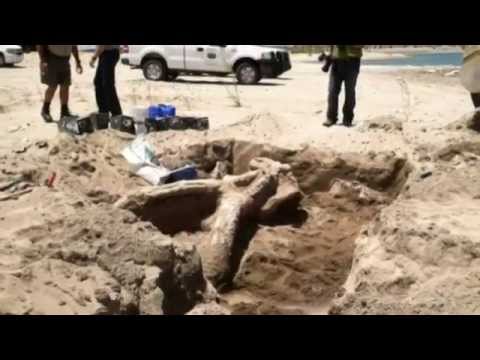 To the scientists’ delight, the fossil was completely intact.

“This is the best one we’ve ever found,” paleontologist Gary Morgan told Las Cruces Sun-News. “Maybe the only complete one found in New Mexico.”

Though they have not yet conclusively identified the fossil, it is most likely a stegomastodon from the Ice Age era (40 to 60 million years ago) and was about 50 years old when it died. The remains of skull do not indicate its gender or cause of death. According to Experts, stegomastodons went extinct around 1.3 million years ago.