A new study published in the journal Nature Climate Change suggests that the increasing temperature of the Arctic will actually lead to fewer deep freezes over the next century. While various oceanic and atmospheric patterns such as El Niño, La Niña and the North Atlantic Oscillation have been blamed for the series of unusual weather recently, the study reveals that Arctic amplification could be one of the most prominent reason responsible for it. Directly related to sea-ice loss and earlier snow melt in the Far North, it is affecting the jet stream around the northern hemisphere with potentially far-reaching effects on the weather.

Arctic amplification describes the tendency for high northern latitudes to experience enhanced heating or cooling relative to the rest of the Northern Hemisphere. This intensified sensitivity is linked with the presence of snow, sea ice and feedback loops that they trigger. 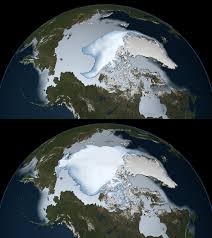 As the world has warmed since the fossil-fuel revolution after World War II, Arctic temperatures have increased at more than twice the global rate. A dramatic indicator of this warming is the loss of Arctic sea ice in summer, which has declined by 40 percent in the past three decades. The area of lost ice is about 1.3 million square miles.

The critical piece of the report written by James Screen, a lead author and a climate researcher at the University of Exeter, is the net change in temperature of Arctic winds blowing south, which typically cause cold snaps like the last winter. The wind arriving from the north is on average comparatively warmer and more consistent as well.

“Cold days tend to occur when the wind is blowing from the north bringing Arctic air south into the mid-latitudes,” Screen said. “Because the Arctic air is warming so rapidly these cold days are now less cold than they were in the past.”

Last winter’s succession of cold snaps across the United States led some scientists to postulate that periods of brutal cold might actually be a global warming related phenomenon and is likely to increase in frequency with climate change. The idea is that warm water is becoming more and more exposed to Arctic air as ice coverage diminishes leading to a convection effect as warming air circulates with typically cold polar air.

According to a paper out today in Nature Climate Change, the overall observational data doesn’t quite back this notion up. What it shows is an overall decrease in cold weather extremes across the US and Europe over the past several decades. “Autumn and winter days are becoming warmer on average and less variable from day-to-day,” said study author Dr. James Screen in a statement. “Both factors reduce the chance of extremely cold days.”

While it’s difficult to point the finger at Arctic amplification in causing any of these weather events, they are the types of phenomena that are expected to occur more frequently as the world continues to warm and the Arctic continues to lose its ice. Further research may find ways to predict which regions will experience which conditions. But in the meantime, it’s  likely that the weather you have today will stick around a while.