A Utah teenager was pleaded not guilty in charge of fatally shooting a police officer and injuring a deputy.

Meagan Grunwald, 17, is being charged as an adult and faces a dozen felonies including murder, attempted murder and felony discharge of a firearm in connection with the Jan. 30 death of Sgt. Cory Wride and the shooting of Deputy Greg Sherwood, both with the Utah County Sheriff’s Office. 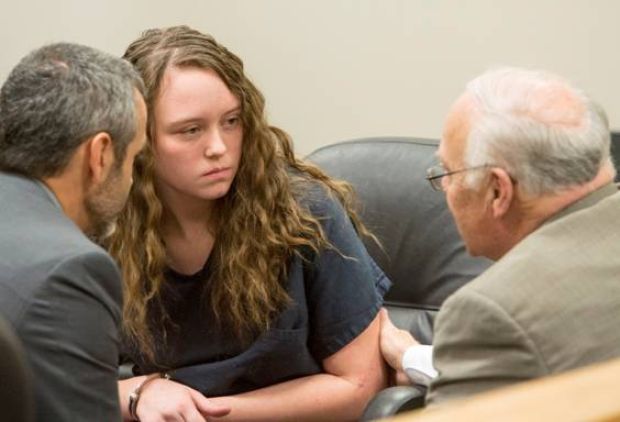 She appeared with her wrists handcuffed at her waist and wore a navy blue jail jumpsuit.

Her lawyer, Dean Zabriskie, told Grunwald will testify in her own defense that her 27-year-old boyfriend compelled her to commit the crimes at gunpoint.

Meagan Grunwald was bound over for trial in April, and Monday morning pleaded not guilty to all 12 charges.

Meagan, spoke quietly in a Provo courtroom Monday as she entered her pleas against all the charges.

Prosecutors say Angel Garcia-Juaregui is the one who shot Sgt. Cory Wride and another deputy. But they debate that it was Grunwald who drove the couple during the chase in a pickup truck registered to the teenager and her mother.

At a two-day hearing in April, prosecutors played dash-cam videos from about half a dozen officers involved in the pursuit along snowy highways in central Utah.

Prosecutors with the Utah County Attorney’s Office also presented telephone records that showed Grunwald called her mother during the chase, but neither of them tried 911.

During the crime spree, Grunwald was intimidated, coerced and “scared to death,” Zabriskie said.

“We mourn, as the whole community does, for this dead police officer, and the other one that was horribly injured,” Zabriskie said. “But we just don’t see that our client is responsible for that and we think the evidence will prove that.”

Prosecuting attorney Tim Taylor said, it is likely a trial date will be set at the next hearing. “We have not met with the Zabriskies to discuss that yet, but in a case like this we always consider if that is appropriate,” Taylor said.

Grunwald might face a 25 year life imprisonment if convicted. She is unentitled for the death penalty as she is a minor.

Grunwald will be court again June 2 for a scheduling conference, when it is likely a trial date and other pre-trial hearings will be set.