You are here: Home / Tech & Science / Solar Wind – A new cause of Thunderstorms 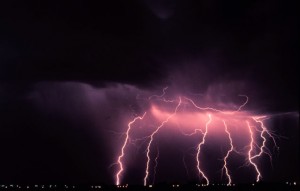 What are the causes of thunderstorms? It has been shown by previous research that cosmic rays that the supernovas generate is one of the main causes. However, something much powerful and closer is shown by a new paper. It is the solar wind, that comes from the sun.

First let us understand as to what solar wind is. It is a constant stream of particles that comes from the sun and picks up only when solar flares are emitted by the sun. The frequency of these flares is more when the number of sunspots on the surface of the sun is higher. This is when the magnetic activity of the sun increases.  The activity of the Sun rises and falls on a 11 year cycle and the year 2014 seems to be close to that.

A significant and substantial increase in the lightening rates were discovered by the researchers for 40 days after the atmosphere of the Earth was hit by solar winds. The reasons behind this are still not understood. However, researchers state that this may be due to the electrical charge changes of the air as the particles hit the atmosphere.  If this is proved, a new nuance can be given to the weather forecasters who could do the incorporation of information about solar wind streams.