You are here: Home / Tech & Science / Scientist are amused with the strage features of this Catfish

Researchers have found the skeletal features of a small, toothy fish, which resemble the terrifying creature from the movie “Alien”.

A tiny, subterranean catfish, Kryptoglanis shajii whose mindboggling skeletal features include a bulging lower jaw similar to a bulldog’s. Scientists are still not able to classify the strange species.

Native to the Western Ghats mountain region of Kerala, India, the unclassifiable catfish is rarely ever seen. It is so difficult to catch that scientists didn’t categorize it as a new species until 2011.

According to John Lundberg, Drexel University’s resident fish zoologist, the characteristics of this animal were just so different that they had a hard time fitting it into the family tree of catfishes and the more they looked at the skeleton, the stranger it got. 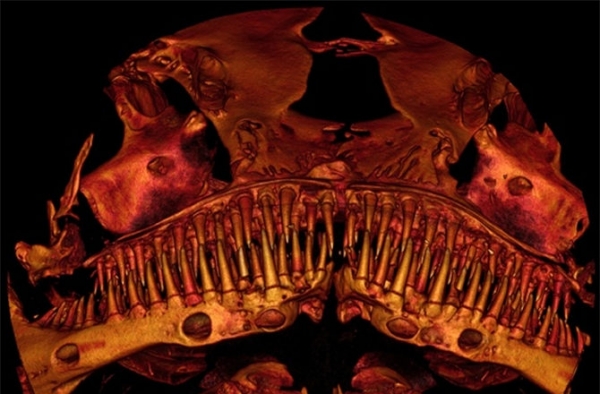 Anomalies in the bones of Kryptoglanis were revealed by digital radiography and high-definition CAT scans but it appears like a normal catfish from the outside.

Several bony elements – a characteristic fairly common for subterranean fish was found missing in Kryptoglanis by Lundberg and his colleagues. Also the changes in the shapes of certain bones were so strange that Lundberg described them as “completely unique among catfishes and all fishes as far as I know.”

Researchers are still trying to figure out what in the natural evolution of these catfish would have led to their modified shape. They believe that these unusual features serve some unknown purpose.

According to Lundberg these species eats meat, such as small invertebrates and insect larvae and these speculations are based on its teeth and subterranean home.

It continues to be a puzzle for Lundberg’s team and the researchers at the Natural History Museum of London, that which catfishes Kryptoglanis is most closely related to.