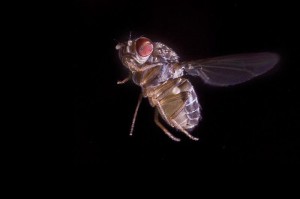 Just like how high school students wait and think over some difficult exam questions, fruit flies too pause for processing the information when they have to make a tough decision. One example of it is when they have to differentiate between 2 odors. This has been proved as per a new study that has been published in the journal science this week.

As per Professor Gero Miesenbock, who leads a researcher team at Oxford University’s center for Circuits and Behavior, this is a very clear evidence of cognitive process that runs in a simple brain. A specific gene was isolated by Miesenbock and fellow scientists. There are around 200 neurons that were associated with the tendency of fruit flies for pondering over some difficult dilemmas.

People usually have an impression that insects are tiny robots that give a reflexive response to the signals of environment. However, this isn’t true.

The researchers concluded the same by first giving training to fruit flies for avoiding toxic smell of high intensity. Next, the flies were offered a choice between a weak odor and a high level one. When the difference is more, flies make a wise choice but when it was low, half chose the less dangerous odor. As the differences were less, the flies took more time for deciding which way they should go.

It was also discovered that flies having mutations of FoxP (gene having association with decision making) took even more time to decide.