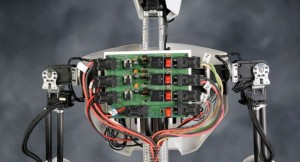 C-3PO was definitely a cool robot, but was quite stiff when it comes to sports. However, it is believed that if a new robotic arm that is developed by researchers at EPFL or Ecole Polytechnique Federale De Lausanne in Switzerland was updated in the robot, it will definitely do well.

At the school, a robot arm has been created by the researchers through which enough adjustments can be made. It can be made very quickly in 5 hundredths of a second and variety of objects that are thrown its way can be caught. The research has been published in the IEEE Transactions on Robotics on the 12th of May.

The length of the arm is around 1.5 meters and has 4 fingers. One functions like a thumb and can pluck a hammer, a tennis racket, a half full bottle, an empty bottle and a ball. A series of cameras is used for watching the objects that come its way and then necessary moves are made for acting like a star center fielder.

Often the machines today are pre-programmed and data changes cannot be assimilated quickly, says the head of Learning Algorithms and Systems Laboratory at EPFL, Aude Billard. The arm was given training to catch the objects which have different centers of gravity and different sizes. The process of ‘programming by demonstration’ is used.