Fairy circles are circular barren patches of dirt, typically found in the grasslands of the western part of Southern Africa. They are most prolific in Namibia, but are also present in Angola and South Africa. The rings, which are found in the arid grasslands of Namibia, can grow as wide as 65 feet and last for more than 75 years.

For several decades scientists are making an effort to come up with an elucidation for the formation of the unfathomable, vegetation-free circles often found in certain African grassland regions.

A recent study ruined the probability of the circles being caused by termites. 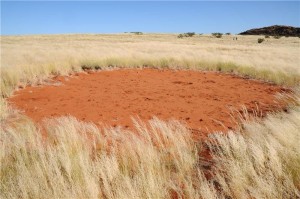 The report was published in the scientific journal Ecography.

“Although scientists have been trying to answer this question for decades their mystery remains as yet unresolved,” states Dr. Stephan Getzin from the Helmholtz Centre for Environmental Research (UFZ) in Leipzig — because up to now no one has been able to actually observe, in situ, the genesis of a fairy circle.

One biologist recently conducted a census of organisms at fairy circles. His results, detailed in the journal Science last year, exposed a species of sand termite, Psammotermes allocerus, that used to live at the majority of patches.

“There is, up to now, not one single piece of evidence demonstrating that social insects are capable of creating homogenously distributed structures on such a large scale,” Getzin said in a statement.

Stephan Getzin and his colleagues from Israel, specialist in this zonal of processing techniques, have simulated very similar belowground competition for water and the resulting spatial vegetation distribution patterns with the help of computer model .  For the UFZ researchers this represents the most satisfactory proof, that the mysterious patches may in fact be the result of spatially self-organising grass growth.