You are here: Home / Tech & Science / DNA links and ancestors of Kiwi and Elephant bird found! 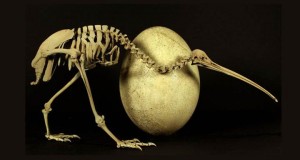 Scientists have recently found DNA links between elephant bird species. They are different and yet similar. These events took place of Thursday, 22nd May, when the scientists identified close relations of a shy, chicken sized bird, Kiwi from New Zealand, in Madagascar. The species found in Madagascar is a giant elephant bird, about 10 feet tall. These species went extinct a few years ago.

After their extinct, this has been like their first appearance in the world. This leads to raise in a lot of questions and the most important being re-evaluation of the facts about ratites, or group of these flightless birds. The ratites were extinct since a very long time, which include the Moa  and elephant bird. The one on the verge of extinction are Emus, Rheas, Ostriches, and Kiwis. Scientists and researchers have found genetic links between the new found elements and Kiwis from New Zealand, though there is a vast difference between the two. Kiwis weigh about 11 pounds, whereas an elephant bird weighs around 600 pounds. That’s like a lot of difference.

According to researchers, Africa and Madgascar have been the ancient supercontinents which then were separated and divided in to seven different continents. The elephant bird went extinct right during this separation, right after the dinosaurs. A deeper research has lead to the understanding that elephant birds and Kiwis emerged from common ancestors and species some 50 million years ago and that’s when New Zealand was isolated.

This theory was found to be published in the journal Science.