You are here: Home / Tech & Science / ‘Caste-System’ of Termites revealed

The genome of termite has recently been sequenced and clues are being revealed as to how a rigid social order is being created by pests. For example, the new genome which has been detailed on the 20th of May in Journal Nature Communications has uncovered some underpinnings of the caste system of termites along with the sexual staying power of the males. 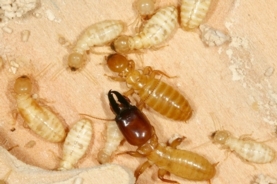 Just like other social insects like wasps, honeybees and ants, termites too have  their caste systems that are highly structured. Each creature performs a defined job. Few termite queens and kings reproduce while few soldiers and drones work and defend the colony and care for the young. An independent social structure has been evolved by the termites from bees and ants that belong to an order known as Hymenoptera.

For understanding how this has happened, a behavioral biologist at Arizona State University, Jurgen Liebig along with his colleagues collected few dampwood termites living in Monterey California. Several insights have been revealed by this research about the social and sexual behavior of termites. The termite society is roughly half females and half males. There are sexually active queens and kings. Kings make sperms throughout their life.  Even the Dampwood Termites have testes that grow and shrivel seasonally.