You are here: Home / Tech & Science / 3D-Printed, Self Assembling Heat Robots In The Making From MIT

Two new studies have demonstrated an innovative design in which 3-D robots, when exposed to heat, can automatically fold, shape and assemble themselves.

Daniela Rus, a professor of electrical engineering and computer science and director of the Computer Science and Artificial Intelligence Laboratory (CSAIL) at MIT, has confirmed the progress in the promise of 3D printed robots by her research team. 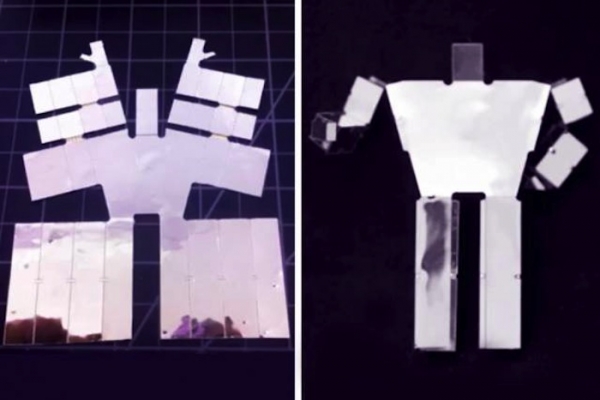 She has decided to announce the research at the IEEE International Conference on Robotics and Automation in Hong Kong this weekend.

The researchers also traversed the path to build electrical components, like resistors, inductors, and capacitors, as well as sensors and actuators — from these self-assembling materials.

Rus and her colleagues used heated sheets of polyvinyl chloride, or PVC, placed between two rigid polyester films that are full of slits to make a two-dimensional sheet of material literally jump off the page and assemble itself into a 3-D machine.

“The PVC shrinks when heated and the slits eventually shut, pushing against each other and altering the shape of the PVC.” “This process bends the material into different shapes, based on the pattern of slits and how the heat interacts with the PVC.”

“We have this big dream of the hardware compiler, where you can specify, ‘I want a robot that will play with my cat,’ or ‘I want a robot that will clean the floor,’ and from this high-level specification, you actually generate a working device,” Rus said in a statement. “So far, we have tackled some subproblems in the space, and one is this end-to-end system where you have a picture, and at the other end, you have an object that realizes that picture.”

Shuhei Miyashita, a researcher at MIT and part of the research team, created an aluminum-coated polyester sensor that can be attached to robots once completely assembled.

The sensor looks like a small accordion, with folds of material that compress and help electrical currents pass through the system.

You’re doing this really complicated global control that moves every edge in the system at the same time,” said Rus. “You want to design those edges in such a way that the result of composing all these motions, which actually interfere with each other, leads to the correct geometric structure.”