Some recent images taken by NASA’s Cassini spacecraft in April 2013 have suggested the birth of a new Saturn moon.

The images show a bright arc about 750 miles (1,200 kilometers) long and 6 miles (10 km) wide at the edge of Saturn’s outermost ring (known as the A ring). According to the scientists, this arc and some strange bumps nearby were probably created by the gravity of a small, icy object —possibly a newborn moon.

Study lead author Carl Murray, of Queen Mary University of London, said in a statement, “We have not seen anything like this before. We may be looking at the act of birth, where this object is just leaving the rings and heading off to be a moon in its own right.” 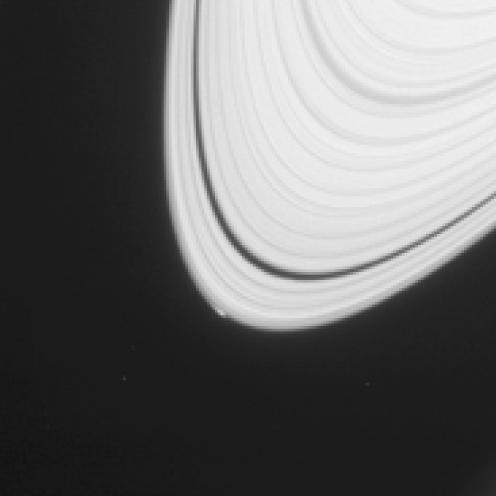 The object, which researchers have dubbed “Peggy,” is at most 0.5 miles (0.8 km) wide. Scientists say this is too small to be seen in images taken by Cassini so far. However, they will be able to study Peggy in detail in 2016 when the spacecraft will move closer to the A ring’s outer edge.

The new study was published online in the journal Icarus.