A group of researchers from Aix-Marseille University has found a 30,000 year old virus of unprecedented size has been found and reactivated.

The virus, known as Pithovirus Sibericum, is likely to affect microorganisms like amoebas and not human beings.

Pithovirus Sibericum is named after the Greek word, “pithos,” that means a large earthenware jar. It was found in a 98-foot-deep sample of permafrost near the East Siberia Sea, where the average annual temperature is 7 degrees Fahrenheit. The virus can be seen under an optical microscope. 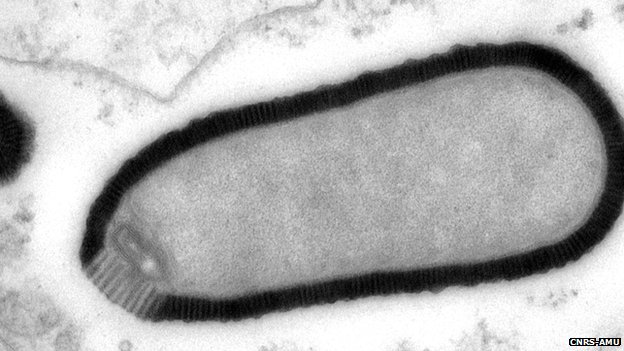 Scientists have raised concerns over the new discovery saying that more harmful pathogens could potentially be revived. The situation is more worrisome as they believe, it could be something no human has ever encountered before.

Study co-author Jean-Michel Claverie says, “There is now a non-zero probability that the pathogenic microbes that bothered ancient human populations could be revived, and most likely infect us as well. Those pathogens could be banal bacteria (curable with antibiotics) or resistant bacteria or nasty viruses. If they have been extinct for a long time, then our immune system is no longer prepared to respond to them.”

Claverie also raised concerns about the hundreds of millions of people that, he says, will be displaced by rising sea levels than the risk of being exposed to pathogens from melting permafrost.

The study was published in the journal Proceedings of the National Academy of Sciences.