You are here: Home / Tech & Science / Will your next home be built by robot termites?

Have you ever imagined a taskforce of robotic workers that can autonomously construct buildings and work synchronously without the need of supervision or specific, pre-determined roles?

The termite, characteristically despised as the wood-eating nemesis of constructions and homes, has inspired a new fleet of construction robots. These miniature automated machines, about the size of a tiny brick, can work as a team to build any predefined structure given to them, without a leader or step-by-step instructions, as termites are thought to do.

Such a process keeps advancing; ideally with many robots toiling away at once to finish the job more quickly — until the structure is complete. This radical technique of construction is very similar to how the tiny termite is thought to create huge, soaring nests.

The engineers were inspired by the way millions of termites collaborating to build complex hillocks of soil hundreds of times their size without needing detailed blueprints for the assemblies. As an alternative, the colony members use indications from one other and their surroundings to lead the construction process, the researchers said. 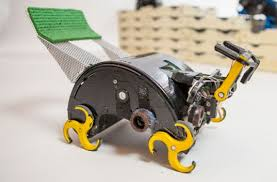 “[In the US] you hear about termites destroying buildings,” said Justin Werfel, author and Harvard University computer scientist. “But in Africa and Australia, they are known for building enormous, complicated mounds of soil.”

Dr. Werfel and his coworkers desired to deploy robotics to hitch the power of stigmergy – a process where agents interconnect indirectly by sensing and modifying the immediate surroundings around them.

“They’re all independent, with each termite doing what it wants to,” he said. “It’s not like they’re getting assigned instructions by the queen; they are just reacting to what they encounter.”

Each termite is an organism of fairly low intricacy but, using stigmergy, a society is capable of building a highly complex structure. So the team started with this simple framework: each robot must have its own basic brain and sensors, as well as be programmed with certain “traffic rules” it must obey.

The sensors enable them to see bricks and robots next to them. They obstruct robots from placing bricks in places where they might easily breakdown, or building a setup where a brick would have to be squashed in between two others.

Each robot, about 20 cms long, comprises of internal metal gears and hardware as well as 3D printed parts. The bricks themselves are also specially made in a way that helps the robots climb and align them better.

“In our system, each robot doesn’t know what others are doing or how many others there are – and it doesn’t matter,” Dr Werfel said.

The main difference between robos and termites is that the latter don’t have a desired end product. Rather, there is a random component involved; given the same starting place, a colony will build a slightly different structure every time. But for constructing a house, the robots must follow a precise blueprint. So Dr Werfel generated the option for a user to insert an image of a precalculated structure, and the robots will go ahead on building that exact structure.

He envisages prospective systems for his robots to work in terrains where recruiting  humans would be hazardous and costly i.e. Underwater ,Mars or for tedious tasks, such as building levies with sandbags.

Dr Werfel operated with the project with theory co-author Kirstin Petersen, a robotics engineer who had individualistically worked on a combined construction project for her master’s thesis in Denmark.  They formed a team along with termite expert Scott Turner, a biologist at the SUNY College of Environmental Science and Forestry.