The kitten was initially taken to the Animal Specialty Hospital of Naples for emergency treatment.
It was taken to the Lowry Park Zoo in Tampa once the kitten become strong enough to travel, for longer-term rehabilitation, the Florida Fish and Wildlife Conservation Commission announced Thursday.

The one-pound kitten was found in the den of FP195 coiled into a ball and suffering from dehydration and low body temperature.

The panther kitten is being bottle-fed with Esbilac powdered milk replacer. The single, male kitten has been gaining weight and will soon be weaned from bottle feeding to a meat diet.

He is under 24-hour care by a team led by Dr. Ray Ball, the zoo’s director of medical sciences.

“We want to give any panther kitten the best opportunity to survive in the wild,” said FWC veterinarian Dr. Mark Cunningham, according to a news release. “But clearly this kitten was in poor condition and almost certainly would have died without intervention.” 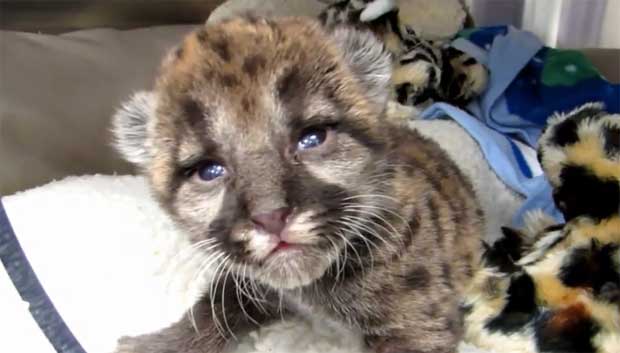 Authorities aren’t aware about what happened to the kitten’s mother, though they believe that she is still alive.

He will not be released in the wild because he is still too young and didn’t learn survival skills from his mother. He is planned to be shifted to the Ellie Schiller Homosassa Springs Wildlife State Park.

“This kitten exemplifies how joint efforts of the FWC, the U.S. Fish and Wildlife Service and our partners are helping recover imperiled species in Florida,” said Kevin Godsea, manager of the Florida Panther National Wildlife Refuge for the USFWS, in a news release. “We are certainly pulling for him and hope he leads a long, healthy life.”