You are here: Home / Health / Teens more stressed out than adults 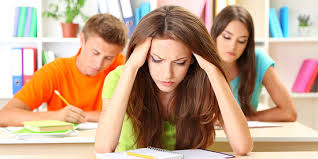 A teen life isn’t as easy as it seems to be. More than ninety percent teens of the world’s population are victims of stressed out lifestyle. They are more afflicted by stress than adults, especially during school years.

American Psychological Association (APA) news release reported this survey that stress equally affects both teenagers and adults and it have a very negative impact on sleeping patterns, healthy eating, and workout.

The team of researchers conducted a survey of around 1,950 adults and 1,018 teens in the U.S. and found a link relating stress and occurrence of unhealthy habits in both age groups.

Most of the teenagers reported their stress levels are above normal, what they previously believed to be healthy; many of the subjects also reported depression and feeling of being weighed down. One of every third teenager reported exhaustion and about a third confessed of skipping meals as a result of stressful lifestyle.

The team concluded that teens are more prone in believing that stress is not the reason of all the health related issues that they are facing, rather than adults.

APA CEO Executive Vice President Norman B.Anderson, PhD, addressed in the news release ,”It is alarming that the teen stress experience is so similar to that of adults. It is even more concerning that they seem to underestimate the potential impact that stress has on their physical and mental health.In order to break this cycle of stress and unhealthy behaviors as a nation, we need to provide teens with better support and health education at school and home, at the community level and in their interactions with health care professionals.”

“Parents and other adults can play a critical role in helping teens get a handle on stress by modeling healthy stress management behaviors,” Anderson remarked. “When spending time with teens, we can encourage them to exercise, eat well, get the sleep they need and seek support from health care professionals like psychologists to help them develop healthier coping mechanisms for stress sooner rather than later.”