US space agency NASA’s Spitzer Space Telescope has captured images of the fugitive stars, charging through the Milky Way galaxy at high speed, thereby creating arcs. The revelations have been made in recent images released by NASA.

The star under review has been named Cassiopeiae or HD 2905. Scientists say, it is a huge, hot supergiant traveling at about 2.5 million mph relative to its neighbors.

The scientists have called the streaky red glow of material in its path as bow shock. The bow shock can be spotted anywhere even in front of the speediest and enormous stars in the galaxy. 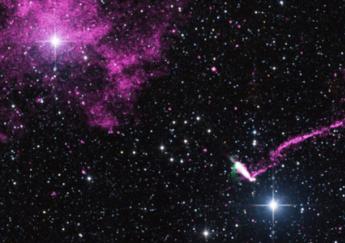 Scientists explain bow shocks develop at the places where the magnetic fields and wind of particles moving off a star collide into the diffuse and generally invisible, gas and dust that fills the space between the stars.

The astronomers predict that the shock produced is approximately four light-years ahead of Kappa Cassiopeiae, the star that can be seen through naked eye in the Cassiopeia constellation. This reveals the massive impact of the speedster star on its surroundings.

The Spitzer Space Telescope mission for NASA’s Science Mission Directorate, Washington is managed by NASA’s Jet Propulsion Laboratory, Pasadena, California. Science operations are carried out at the Spitzer Science Center at the California Institute of Technology in Pasadena.