Researchers have claimed to discover the secret behind planets which orbits around two stars.

Researchers from the University of Bristol said that a binary star system or a system containing a planet is birthed in the most extreme environment in the universe.

These types of planet are also known as ‘Circumbinary planets’.

One such example of a circumbinary planet is Kepler-34 (AB). Discovered by the Kepler space telescope, this planet has been the subject of the researchers including Zoe Leinhardt from the School of Physics of the University of Bristol.

Their study aimed at explaining how binary star systems came to be.

After perusing the earliest stages in planet formation on binary star systems, the researchers’ team found that most of the planets in these systems were formed far from the central binary sun before they slowly gravitated to their current location. 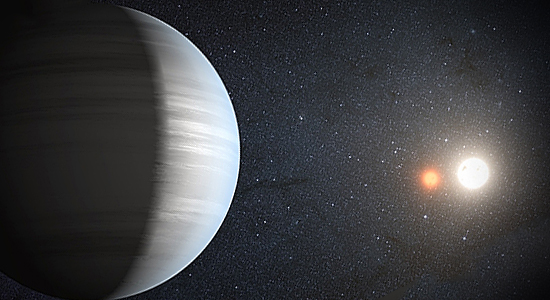 The results also showed that all circumbinary planets including Kepler-34 (AB) reached their current position by slowly moving away from the place where they were formed.

Researchers said that the gravitational pull from the two stars may cause extreme destruction on the surface of the planet revolving around them.

Computational astrophysicist Dr Zoë Leinhardt said that the simulations show that the circumbinary disk is a hostile environment even for large, gravitationally strong objects.

“Taking into account data on collisions as well as the physical growth rate of planets, we found that Kepler 34(AB) would have struggled to grow where we find it now,” Leinhardt added.

According to Stefan Lines, lead author of the study, circumbinary planets have important implications in the further exploration of our universe.

“Understanding more about where they for will assist future exoplanet discovery missions in the hunt for earth-like planets in binary star systems,” Lines added.