What does Pope Francis do with the spanking new 2013 Harley-Davidson FXDC Dyna Super Glide that the legendary bike maker gifted him to celebrate the US company’s 110th birthday? He sells it off of course. The 1,585 cc bike recently went under the hammer where it fetched a whopping 210,000 euros. This translates to about $284,000 which is 20 times more than the bike’s estimated value. The other item that too was auctioned off is the biker jacket also presented by Harley Davidson. The XL sized jacked fetched an equally impressive 50,000 euros or about $68,000. Both the items have been personally signed by the pontiff and have never been used.

The proceeds from the sale have been donated to a noble cause, for renovating Caritas Rome’s Don Luigi di Liegro hostel as well as the soup kitchen at the Termini railway station in Rome. Director of Caritas Rome, Monsignor Enrico Feroci expressed his heart felt gratitude at the Pope’s generosity saying this proves the special place that the poor and downtrodden have in the Pope’s heart and thoughts. The London based auctioneer Bonhams on their part are extremely pleased with the wide publicity that the auction process has generated. 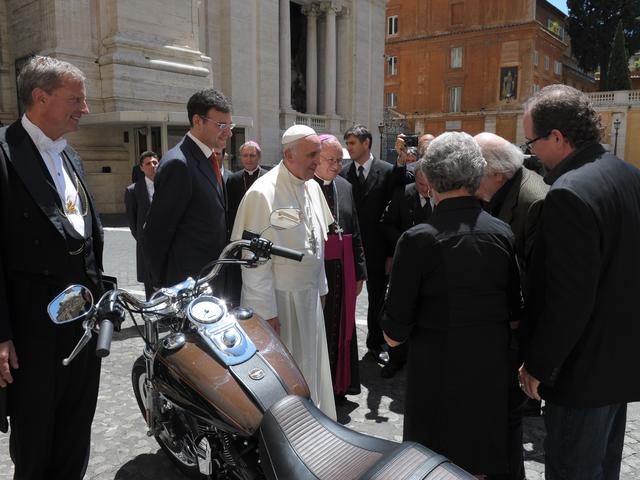 As for the winner, it remains unidentified and the winning bid was made via phone. However, the European, the only thing known of the winner so far, will have to fork out another 30,000 euros or $40,800 to pay for the auction costs. In any case, 210,000 euros for the Harley Davidson bike can be considered to be the highest ever paid so far. The auction was held in Paris and included about 300 other vehicle from legendary brand such as Rolls Royce, Facel Vega, Cadillac and Panhard, to name just a few.