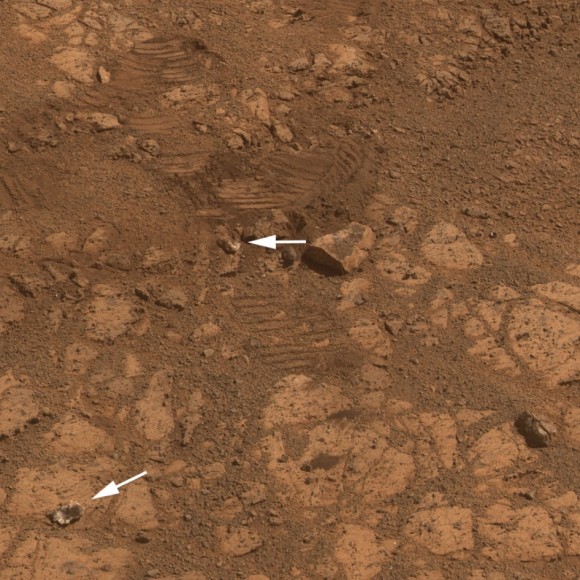 The mystery of the odd and famous “jelly doughnut” rock on Mars have been deciphered by meticulous mission scientists of NASA.

The doughnut shaped Martian rock had been puzzling scientists after Mars rover Opportunity photographed it on Jan. 8, as it appeared out of nowhere on Mars.

Four days earlier on December 26, 2013, the rock wasn’t there at all. So the question arises how did the rock appear? 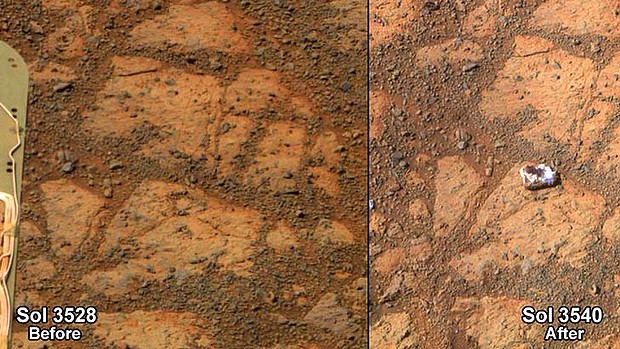 It was described by Steve Squyres, lead scientist of the Mars Exploration Rover mission as a white rock with a dark red low spot in the middle. The rock, more than 1.5 inches wide, was named Pinnacle Island.

The elucidation is somewhat banal: the four centimetres wide, white-rimmed, red-centered rock, was simply dribbled up by one of Opportunity’s wheels as it paved its way across the planet’s surface.

“Once we moved Opportunity a short distance, after inspecting Pinnacle Island, we could see directly uphill an overturned rock that has the same unusual appearance,” said Ray Arvidson, Opportunity deputy principal investigator of Washington University in St. Louis.

A concerned citizen even filed a lawsuit against the space agency, alleging that NASA failed to accurately examine a potential fungus budding on the Red Planet.

By inspecting Opportunity’s tools, mission scientists have revealed that the rock has very high intensity of sulfur and manganese. Both elements are water-soluble, signifying that they were concentrated in the rock due to the “action of water,” NASA officials said.

“This may have happened just beneath the surface relatively recently,” Arvidson said, “or it may have happened deeper below ground longer ago and then, by serendipity, erosion stripped away material above it and made it accessible to our wheels.”

“We are now past the minimum solar-energy point of this Martian winter,” Opportunity project manager John Callas, of NASA’s Jet Propulsion Laboratory in Pasadena, Calif., said in a statement.

“We now can expect to have more energy available each week. What’s more, recent winds removed some dust from the rover’s solar array. So we have higher performance from the array than the previous two winters.”

Opportunity weighs 384 pounds and measures about 5 feet in both length and height.Opportunity’s companion, Spirit, landed on January 4, 2004 stopped being in touch with Earth in 2010.

So far Opportunity has snapped over 188,700 amazing images on the first overland expedition across the Red Planet.