Researchers have found the oldest embryos of a Mesozoic marine reptile in China, that they say must be 248-million-year-old.

Elaborating upon the fossil from the Mesozoic era (252 to 66 million years ago), researchers said that they found the fossils of as many as three embryos: An ichthyosaur baby inside its mother (orange),  another stuck in her pelvis (yellow) and a third embryo that was stillborn. They believe that their mother must have died during a difficult labor.

Ichthyosaur is narrow, eel-like creature that belongs to the genus Chaohusaurus. Scientists say it is the oldest known species of the group. 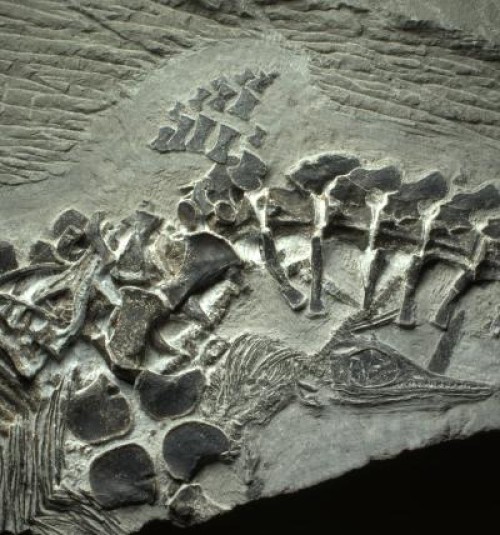 The findings were not only surprising for the Mesozoic-era discovery but scientists say this has made new revelations that ichthyosaurs—also dubbed sea monsters—can not only gave birth in water but also on land.

It was believed that these creatures can only give birth in water. After studying the fossils they reached to the conclusion that as the fossil showed the offspring emerging head-first, they can give birth on land.

Giving birth with offspring emerging head-first is a behavior found only in animals that give birth on land, researchers explained. The babies of most marine animals like whales are born tail-first, they underlined.

It is a common theory that reptiles lay eggs and mammals give birth to live young. This strategy is known as viviparity. But this new study suggests that there is a missing link in the reproduction pattern of the reptiles.

The findings of the study were published on February 12 in the journal PLOS ONE.