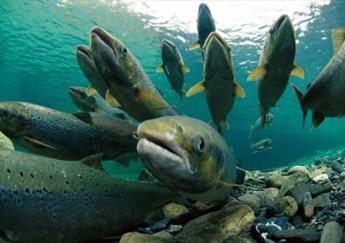 With the help of Earth’s magnetic field and an inherited internal map, juvenile Chinook salmon can find their way to ancestral feeding grounds, according to a new study by Oregon State University.

Until now, loggerhead sea turtles have been the only animals found to know ancestral migration routes from the instant they hatch.

Millions of chinook salmon choke the rivers and creeks of British Columbia in a puzzling migration approach for the scientists for generations.

The fish traverse hundreds of thousands of kilometres all the way through the ocean and then fight the current swimming upstream to spawn, and die, in the fresh water where they hatched.

Internal maps of hundreds of juvenile salmon were tested by placing individuals in test tanks, letting the fish acclimatize for approximately 10 minutes and then manipulating the magnetic field in the surroundings of the tank using coils with electric currents running through them.

Co-author of the study Nathan Putman said everyone was surprised that by that time salmon had that ability.

“Before the fish even hit saltwater, they already have a sense of what they should be doing if and when they should find themselves in a certain magnetic field”, said Putman.

The amalgamation of the magnetic intensity, which grows stronger toward the poles, and the inclination angle of the magnetic field form a sort of grid that the salmon on impulse use as an hereditary magnetic map, Mr. Putman said.

“Without this ability, fish would be forced to wander at random, which could be very costly – wasting energy, or worse, going to unfavourable places that lead to starvation, high predation risk, inappropriate temperatures, etc.,” Mr. Putman said.

“Really, the ability for salmon to navigate is what holds their whole life cycle together and makes it possible.”

The study will be published this month in the Current Biology.