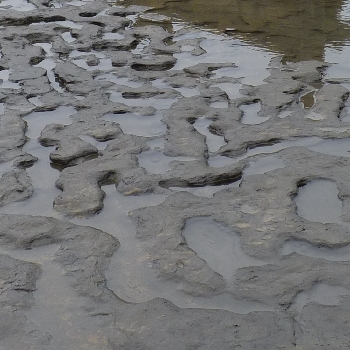 A team of British scientists have discovered the earliest evidence of human footprints which are more than 800,000 years old, outside of Africa on England’s eastern coast. A series of markings on mud exposed by a storm have been identified in Happisburg, Norfolk last May.

A study published Februry 7 in the science journal Plos One describes the findings and the species thought to have left them. The oldest known footprints are preserved in volcanic ash at Laetoli in Tanzania.

“At first, we weren’t sure what we were seeing,” said Nick Ashton, who has published the analysis, “but it was soon clear that the hollows resembled human footprints.”

Analysis of the prints discovered that the footprints are likely made by five early humans including men, women and children who were making their way south along the muddy banks of an ancient estuary.

Researchers note that the foot sizes are similar to those of Homo antecessor, also known as “Pioneer Man,” who was known to have lived in southern Europe.

Over the next two weeks the team used photogrammetry and laser scanning techniques to produce a 3D record of 152 of the mysterious hollows. A detailed analysis of these images by Dr Isabelle De Groote of Liverpool John Moores University showed that the impressions were elongated like a foot.

Dr De Groote said she could make out the heel, arch and even toes in some of the prints, the largest of which would have filled a UK shoe size 8 (European size 42; American size 9).

“They appear to have been made by one adult male who was about 5ft 9in (175cm) tall and the shortest was about 3ft. The other larger footprints could come from young adult males or have been left by females”.

The discovery of the stone tools used by such people was made by the same researchers’ team in 2010. And the discovery of the footprints now all but substantiates that humans were in Britain nearly a million years ago, according to Prof Chris Stringer of the Natural History Museum, who is also involved in the research at Happisburgh.

Just three weeks after they were discovered, the ancient footprints were gone, completely eroded by the waves.