On Thursday a pilot took on an unusual mission, something park employees tenderly entitle as “Helipoo day.”

“We are actually removing the human waste off of Scout Lookout,” Park Spokeswoman Aly Baltrus said. 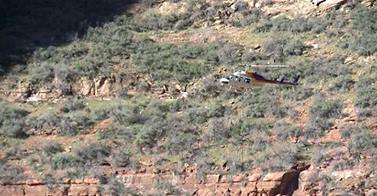 The two evaporative toilets on top of Scout Lookout which is part of the West Rim Trail that provides access to the lookout and Angels Landing need to be made vacant manually, and as the lookout is close to 1,000 feet up, it can simply be completed once a year, by air.

The park stopped the trail, leading to Angels Landing, while helicopters took up 15 drum barrels, and a constricted septic company impelled the waste out.

The temporary shutting down is planned from 8 a.m. to 1 p.m. on both days.

“We can only really do this once a year because flying up to Scout, there is a lot of other issues going on,” Baltrus said. “For instance, the condors are out there, peregrine falcon.”

“In order to not mess with any of their nesting.”

Managers said this trace that leads up to Scout Lookout have gained fame, but the restroom conveniences up at the top stay unchanged. And they’re not outfitted to hold that boost in tourists.

The toilets, according to a news release from the park, were designed for use by 50 people per day. The number of people using the trail side toilets is about 400 per day.

Often hikers will find them closed because they’ve reached their capacity.

Zion officials ask visitors to use restrooms located at the Grotto parking and shuttle stop area before they start hiking up to Scout Lookout or Angels Landing.

“I think they’re doing a good job,” hiker Jean Ni said. “It’s better than people taking a little break up there wherever they choose. I know that’s a problem at some trail heads.”

The trail will close once more on Monday morning, when the helicopter comes back to bring the full barrels back down.