You are here: Home / Technology / Asus VivoTab 8 Listed at the Microsoft Store For $329

The Asus VivoTab Note 8 is now available from the Microsoft Store where it has been listed at $329. This applies to the 32 GB model. The tablet has very thin bezel which along with the rest of the design makes it perfect for one handed use. It also comes with a digitizer stylus which is based on Wacom technology. The tablet had first been officially heard about during the CES 2014 which had been held just last month.

The company claims that the digitizer stylus gives the VivoTab a very high degree of accuracy. It has more than 100 levels of pressure sensitivity built into it. That gives the user a very natural experience of using the stylus for drawing or writing. Users can very well consider this tablet to be a complete substitute for their traditional sketchpad or scrap pad at home. 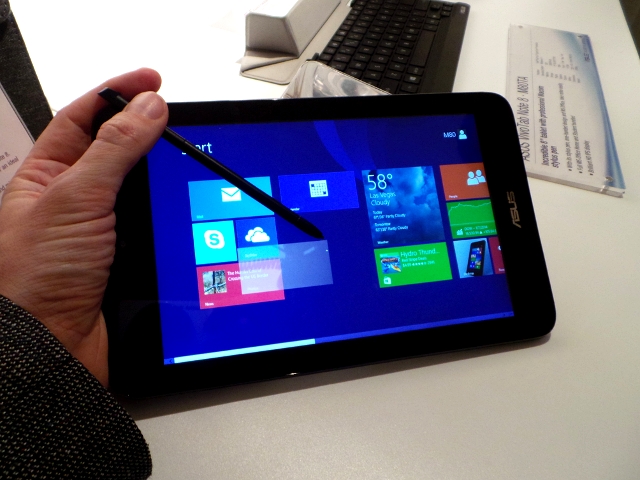 Other features of the device are its 8 inch screen based on IPS technology, the screen resolution being 1280 x 800 pixels. At its core there is an Atom Z3740 processor clocking at 1.86 GHz as well as an Intel HD card for the graphics part. It also has a RAM of 2 GB and the battery pack which can last 8 hours of operation is rated at 15.5 Watt hour. The 32 GB internal storage can be enhanced further with 64 GB of additional external memory via the microSD card slot. It is a dual camera tablet with the front one of 1.2 MP and the rear of 5 MP. To connect external units the tablet comes with a microUSB port. So far as software goes there is Miracast support and Microsoft Office Home and Student 2013 that comes pre-installed on the device.

For comparing there is the 7 inch Tegra Note 7 from Nvidia that also comes with a stylus and is Android based. The stylus is not Wacom technology based as Nvidia has its own custom built stylus having all the features. The Nvidia tablet comes with 10 point touch input, a screen resolution of 1280 x 800, 1 GB of internal RAM and 16 of storage space.